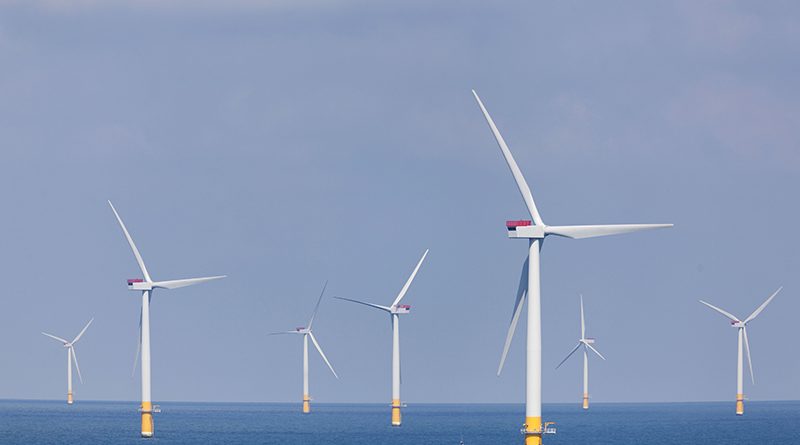 All wind turbines operate in the same basic manner. As the wind blows, it flows over the airfoil-shaped blades of wind turbines, causing the turbine blades to spin. The blades are connected to a drive shaft that turns an electric generator to produce electricity. Image provided by BOEM

WASHINGTON — On April 27, the Department of the Interior announced the Bureau of Ocean Energy Management (BOEM) will publish two separate Calls for Information and Nominations for possible leasing in areas determined to be suitable off the coast of Oregon and in the Central Atlantic.

A Call for Information and Nominations (Call) represents an important early opportunity for BOEM to obtain information from and engage with ocean users and stakeholders as the bureau seeks to identify areas of least conflict for offshore wind development.

“More specifically, a Call will help BOEM gather information to identify (1) the areas where offshore wind development may be safely and responsibly developed, (2) other uses of the area, and (3) environmentally sensitive or other areas that should be excluded from development or otherwise protected, “said Lissa Eng, the Public Affairs Specialist for BOEM in an email from May 9. “A Call will also help BOEM determine competitive interest in offshore development.  A Call does not mean that BOEM will ultimately grant a lease for a particular area. Rather, it indicates that the area described may be subject to future leasing.”

The offshore wind energy development has the potential to create good-paying, union jobs, and related economic benefits. According to a recent report, the nation’s growing offshore wind energy industry presents a $109 billion revenue opportunity to U.S. businesses over the next decade. In addition, achieving the Administration’s goal to deploy 30 GW of offshore wind capacity by 2030 could create almost 80,000 jobs.

Thank to solid partnerships with states and industry to spur investment in a domestic supply chain, these economic opportunities are becoming a reality, including:

On May 8, Secretary Haaland and BOEM Director Amanda Lefton participated in a signing ceremony to celebrate a groundbreaking project labor agreement between North America’s Building Trades Union (NABTU) and Ørsted North America. This agreement – titled the National Offshore Wind Agreement – is the first of its kind overarching agreement in the U.S. It will encompass all Ørsted projects, the largest leaseholder, from Maine to Florida, up and down the Atlantic Coast.

The agreement will develop offshore wind-specific training programs and establish a separate Offshore Workforce Equity Fund to support programs that offer training and services to women, people of color, and environmentally disadvantaged people looking to work in the offshore wind industry.

This will serve as a model for future offshore agreements between offshore wind developers and contractors.

Over the past year, the Biden-Harris administration and the Interior Department have launched the American offshore wind industry by approving and celebrating the groundbreaking of the nation’s first two commercial-scale offshore wind projects in federal waters. The department also held a record-breaking New York Bight auction and announced plans to potentially hold up to seven new offshore lease sales by 2025.

“The Biden-Harris administration is committed to supporting a robust clean energy economy, and the upcoming steps taken toward possible leasing off the coast of Oregon and Central Atlantic provides another opportunity to strengthen the clean energy industry while creating good-paying union jobs,” said Secretary Deb Haaland in the press release. “We will continue using every tool in our toolbox to tackle the climate crisis, reduce our emissions to reach President Biden’s bold goals, and advance environmental justice.”

Published in the Federal Register on April 29, each call initiated a separate comment period during which the public could submit relevant information on site conditions, marine resources, and ocean uses near or within the Call Areas. Concurrently, wind energy companies can nominate specific areas they would like to see offered for leasing.

These calls come after robust engagement with stakeholder organizations, ocean users, federal agencies, states, Tribal governments, and other parties to identify conflicts and engage early in the process as BOEM seeks to advance offshore wind in areas with the most negligible impact. This next step in the process allows BOEM to obtain information from and engage with ocean users and stakeholders as the bureau seeks to identify areas of most minor conflict for offshore leasing and wind energy development. This information will be used to significantly narrow the scope being considered for offshore wind development leasing as BOEM seeks to identify wind energy areas.

BOEM is seeking information on six distinct areas in the Central Atlantic, comprising almost 3.9 million acres. The closest point to the shore of any of the regions is approximately 20 nautical miles off the Central Atlantic coast. Publication of the Call in the Federal Register will initiate a 60-day public comment period ending at 11:59 p.m. ET on June 28. Additional information on the Call, including a map of the areas and directions for commenting, can be found on BOEM’s Central Atlantic webpage.

The Oregon Call, the first action of its type off the Oregon coast, requests information on two areas that comprise approximately 1,158,400 acres combined. Both sites – the Coos Bay Call Area and the Brookings Call Area – begin about 12 nautical miles from shore at their closest points, off the coast of central and southern Oregon, respectively. Publication of this Call will initiate a 60-day public comment period, also ending at 11:59 p.m. ET on June 28. For more information on the Call, including a map of the areas and instructions for commenting, see BOEM’s Oregon webpage.

The Administration has already made significant progress toward creating a pipeline of projects. For example, BOEM now has 25 commercial leases in the Atlantic and has approved the nation’s first two commercial-scale offshore wind projects in federal waters: the 800-megawatt Vineyard Wind project and the 130-megawatt South Fork Wind project.

Since 2021, BOEM has initiated the review of nine projects, and now has more to come. However, because of the work at BOEM and across the federal government on advancing new projects and lease sales, they are well-positioned to meet their 2030 goals.

This past fall, Secretary Haaland announced a new leasing path forward, which identified up to seven potential lease sales by 2025, including in the New York Bight (held earlier this year), offshore the Carolinas (to be held on May 11), and offshore California (to be held later this year), to be followed by lease sales for the Central Atlantic, the Gulf of Maine, the Gulf of Mexico, and offshore Oregon.

“To advance this path forward, BOEM recently published two separate Calls for Information and Nominations to invite public comment on and assess commercial interest in offshore wind energy development off the coast of Oregon and in the Central Atlantic,” said Eng. “This milestone reflects years of working with our government partners, ocean users, and others to help us identify areas that may be suitable for future offshore wind energy leasing. ”

BOEM will consider public comments and commercial nominations in response to the Calls to analyze potential use conflicts before designating specific wind energy areas (WEAs) within the respective Call Areas. BOEM will then conduct environmental reviews of the WEAs in consultation with the appropriate Federal agencies, Tribes, State and local governments, and other key stakeholders. After completing its environmental assessments and consultations, BOEM may propose one or more competitive lease sales for areas within the WEAs.