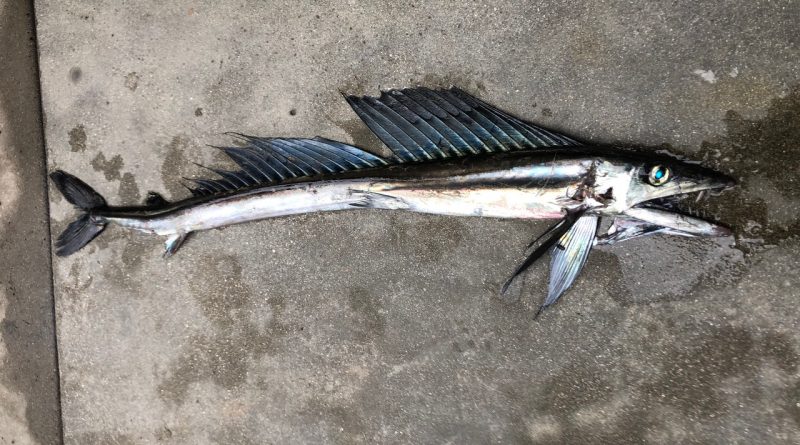 It is unknown how and why the fish carcasses wash ashore from so many thousands of miles away and it is rare to have it happen so many times in a year. Image provided by Ben Frable, Scripps Institution of Oceanography

SOUTHERN CALIFORNIA— May of 2021 marked the first of four bizarre incidents with deep-sea fish washing ashore along the Southern California coastlines. The second, third, and forth discoveries were made in November along Newport Beach and San Diego’s shorelines, and the final deep-sea fish washed ashore in La Jolla in December.

The first fish to wash ashore was a jet-black, bioluminescent ‘Football Fish,’ which typically lives in depths of 3,000 feet and rarely makes an onshore appearance in one solid piece. The creepy looking Pacific football fish (a member of the anglerfish family) has a mouth full of sharp teeth, a football shaped body, and a single, long filament sprouting from the middle of its head. The fish was discovered on the shores of Crystal Cove State Park’s Marine Protected Area in Newport Beach by a woman on a stroll at Swami’s Beach. The fish was identified as a female due to the protruding appendage on top of its head; females can grow to be 24 inches long whereas males only grow to be one inch long. How the anglerfish wound up on shore and in perfect condition is unknown. The California Department of Fish and Wildlife currently has the fish while professionals determine where the fish should go next.

The second fish that washed up in November was identified as another Pacific football fish; still gross and baring sharp teeth, but of a much lighter color. The anglerfish was first mistaken as a jellyfish by its founder, until closer examination proved it to be a light pink colored Football fish. The male Pacific football fish is a sexual parasite that impregnates the female by fusing itself to her body and pumping her with sperm.

A lancet fish washed ashore on Nov. 15 in Newport Beach— still alive. Video footage captured the fish flopping and struggling on the sand as it widely opened and closed its long, toothed mouth. The video was captured by Davey’s Locker Sportfishing & Whale Watching, based out of Newport Beach. The fish itself is not rare considering the species inhabits every ocean on the globe, but it is extremely rare to find one alive and washed ashore.

In December a second lancetfish measuring four feet in length was found in San Diego. The fish was found in near perfect condition, except for a chunk mission from its neck due to poaching seagulls. The terrifying looking fish is a medium-sized open ocean predator with a long slender body and is a cannibal, often feeding on other lancetfish or anything they encounter.

How these deep-sea fish keep washing ashore is as mysterious as the fish themselves, however there are many ways other fish have washed ashore. Whether its red tide causing fish to die then wash up ashore by currents or if it’s because of a cold-water upwelling, it has not yet been explained how a fish from 6,000 feet below can make its way to Southern California’s sandy shoreline, dead or alive.