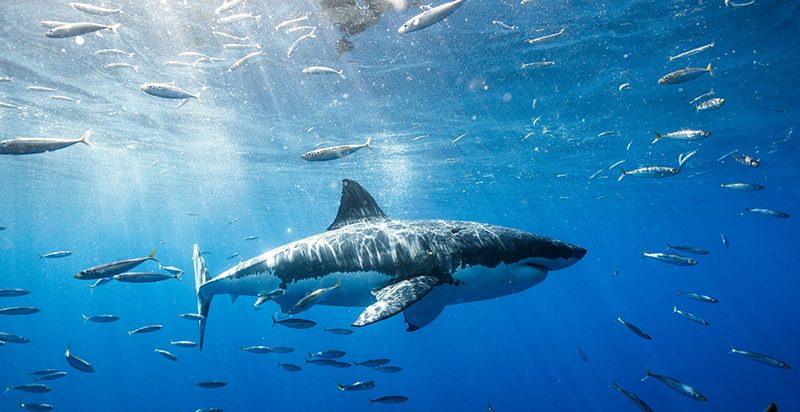 A nine-foot white shark disappeared without a trace four months after it was tagged in southwestern Australia. Shutterstock image

After a great white shark was tagged by a research team in the southern hemisphere, it disappeared without a trace leaving behind a bizarre trail of data leaving researchers to believe the shark was eaten by something larger and unidentifiable.

In November 2003, a research team based in Australia tagged a female nine-foot great white shark off southwestern Australia with a tag meant to record ambient temperatures and depth, allowing scientists to study the shark’s behavior.

Just four months after the tag was attached, records show she abruptly dove almost 2,000 feet with a 32-degree temperature spike from 46 to 78 degrees. Then the shark vanished without a trace. The tag attached to the shark washed up on shore two and a half miles from where the shark was first tagged.

A filmmaker, Dave Riggs, was working with the team and was charged with documenting the study, which was released in a Smithsonian documentary in June 2014.

In the documentary, Riggs and the team of researchers determined that the shark was eaten by something larger, but they were baffled by what it could have been.

Researchers guessed that a large animal came up under the shark and dragged it to the bottom, where the animal was swallowed, causing the dramatic dive and the 32-degree spike in temperature.

However, according to a June 13, 2014, article in National Geographic, a white shark’s stomach temperature runs between 65 to 70 degrees which would not explain the temperature drop.

On the other hand, an orca’s internal temperature runs about 90 degrees which is well below the 78 degrees the tag recorded.

“The internal temperature of the animal that ate the shark is a weird one,” said Rigg in the documentary. “It appears to be too low for a killer whale and too high for another shark unless it was massive.”

Camrin Braun, a doctoral student at the Woods Hole Oceanographic Institution in Massachusetts, told National Geographic that the orca could have swallowed cold seawater, which could explain the drop in temperature.

Researchers still do not have an exact answer on what ate the white shark, but the internet has definitely had some thoughts on the subject, ranging from a giant squid to the return of the megalodon. However, there is one haunting fact about the incident. There is something in our ocean that is large enough to prey on a nine-foot white shark.