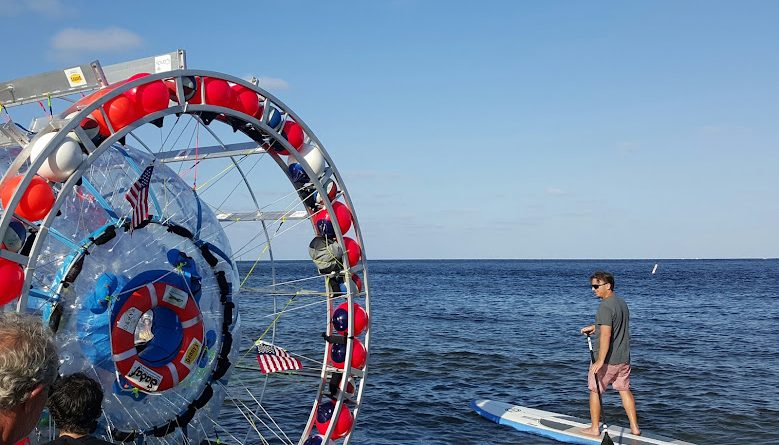 SAINT AUGUSTINE, Fla.一 Reza Baluchi, an Iran-born cyclist, has built his own version of a hydro-pod to hopefully run the pod from Saint Augustine, Florida to Bermuda, over a 3,000-mile trip all in the name of charity.

Baluchi’s hydro-pod sits in the middle of a large wheel with several spokes attaching the pod to the wheel to add to the stability of the structure, the wheel is then attached to 36 buoyancy balls to stay afloat.

On August 2 Baluchi posted on his Facebook page Run with Reza, updating followers about this adventure and talked about the new design.

“During the month of July, there were multiple dry runs and tweaks to the new Hydro-pod, 2021!” said the August 2 Facebook post. “This year’s vessel is more sturdy and takes to the ocean well! Yesterday, off the East coast of Florida, Reza was able to run in the ocean for a couple of hours, checking stability, audio transmissions, etc.”

Baluchi uses a satellite phone to connect with his team as well as SPOT a satellite messenger that will keep track of Baluchi’s location as he traverses the ocean, that along with a backpack of Gatorade and protein bars Baluchi will be on his way.

This is not the first time Baluchi has attempted the journey, the mission started in 2014 when Baluchi attempted his first trek to Bermuda before being rescued by the Coast Guard.

Baluchi tried a second time in 2016 but was rescued by the Miami Coast Guard off the coast of Jupiter who deemed the approximately five-month journey to be too dangerous.

Baluchi is looking to raise funds for those in need, the homeless, children, and service departments like the police and firefighters.

For more information or to follow Baluchi on his journey check out Run with Reza at https://www.facebook.com/runwithreza.