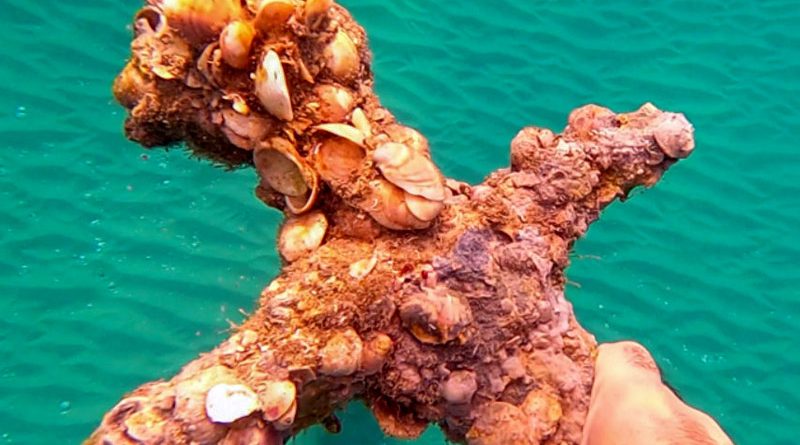 The sword dates back 900 years and is thought to have belonged to a knight in the Crusades. Image provided by Shlomi Katzin / Israel Antiquities Authority

ATLIT, Israel一 A diver off the Carmel Coast in Israel made a historical find, a 900-year-old sword covered in organisms and buried in the sand.

Shlomi Katzin, a resident of Atlit, Israel, was diving off the coast on Oct. 16 when he discovered several ancient artifacts on the seabed.

Katzin found pieces of pottery, stone anchors, and an impressive three-and-a-half-foot sword that appeared to be uncovered by waves shifting the sand.

Katzin, fearing the sword would be stolen or buried underneath shifting sands, brought it up to shore and contacted the inspector for the Israel Antiquities Authority Northern District’s Robbery Prevention Unit to report the find.

The sword was handed over to the National Treasures Department, where it was identified as an iron sword dating back 900 years during the time of the Crusades.

“The sword, which has been preserved in perfect condition, is a beautiful and rare find and evidently belonged to a Crusader knight,” said Nir Distelfeld, Inspector for the Israel Antiquities Authority’s Robbery Prevention Unit, in an Oct. 18 press release from the Israel Ministry of Foreign Affairs. “It was found encrusted with marine organisms but is apparently made of iron. It is exciting to encounter such a personal object, taking you 900 years back in time to a different era, with knights, armor, and swords.”

The Carmel Coast is dotted with natural coves that experts believe provided shelter for ancient ships and larger coves that allowed cities and settlements to develop around the water.

“These conditions have attracted merchant ships down the ages, leaving behind rich archaeological finds,” said Kobi Sharvit, director of the Israel Antiquities Authority’s Marine Archaeology Unit. “The recently recovered sword is just one such find.”

The site where the sword was found has been monitored by the Israel Antiquities Authority since June, when another discovery was made in the area.

Artifacts found at the sight show that the anchorage was used as early as 4,000 years ago during the late Bronze Age. Once the sword has been cleaned and researched, it will go on display for the public.