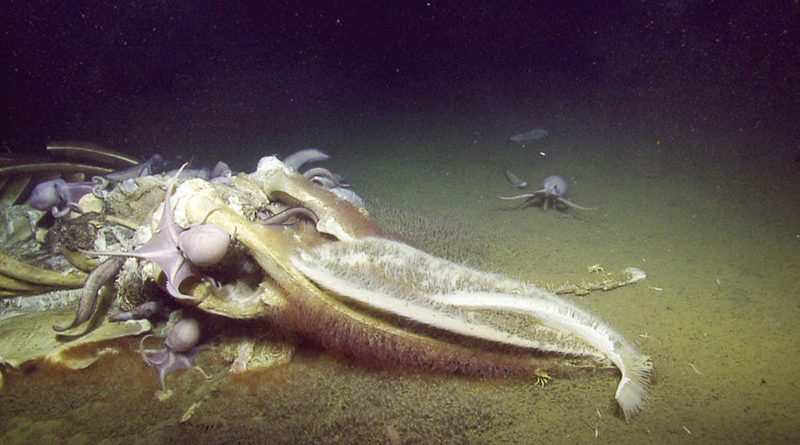 When a whale dies, its carcass sinks to the seafloor. These sunken carcasses, known as whale falls, are important sources of nutrition for many deep-sea species. This whale fall was discovered in Monterey Bay National Marine Sanctuary during a 2019 expedition with the E/V Nautilus. Image courtesy of NOAA/ OET

MONTEREY BAY– A recent study has found that octopuses living in the deep sea off the coast of California are breeding faster than expected by strategically laying eggs in the warmer water of geothermal springs, which helps speed up hatching.

Ocean temperatures are rising and the acidity in the water is increasing, many species, including many corals, cannot thrive in these conditions and researchers have decided that some will inevitably not survive.  Octopuses are one of the species exempt to these changes.  As temperatures rise and overfishing decreases competition, the number of octopuses is increasing.

The animals lay their eggs near geothermal springs, and the warmer water speeds up embryonic development. That reproductive sleight of hand means that the octopus moms brood for less than two years, instead of the estimated 12.

However, with water temperatures teetering around a chilly 35-degree F, this garden is expected to grow leisurely. In octopuses, embryonic development tends to slow down at low temperatures, according to marine ecologist Jim Barry of the Monterey Bay Aquarium Research Institute in Moss Landing, in an interview with Science News. “When you get really cold, down near zero, that’s when brood periods get really long.”

The record for the most prolonged brood period of any animal, just over four years, is held by a different species of octopus living in warmer water.

Barry and his colleagues repeatedly visited the Octopus Garden from 2019 to 2021 using a remotely operated vehicle to verify what would be a record-setting stint of motherhood. The team focused cameras on the octopuses’ eggs, which resemble white fingers, to monitor their rate of development. With one of the submersible’s robotic arms, the researchers also gently nudged dozens of octopuses aside and determined the temperature of the water in their nests.

The results showed that the eggs are soaked in relatively warm water, of up to 51-degree F. Researchers realized that the female octopuses chose to lay their eggs in streams of geothermally heated water. According to Barry, that discovery was a hint that these animals are not the long-haul moms people thought them to be.

Based on observations of the developing eggs, Barry and colleagues determined that the moms brooded for only 600 days, or about a year and a half.

There is an evolutionary advantage to seeking out warmer water; shorter brood periods mean fewer eggs are likely to be gobbled up by predators.

Only a few marine animals, such as icefish in Antarctica’s Weddell Sea, are known to seek out warmer conditions for breeding. But researchers believe other species may do the same. The challenge is finding them and their breeding grounds in the vast expanse of the deep ocean.