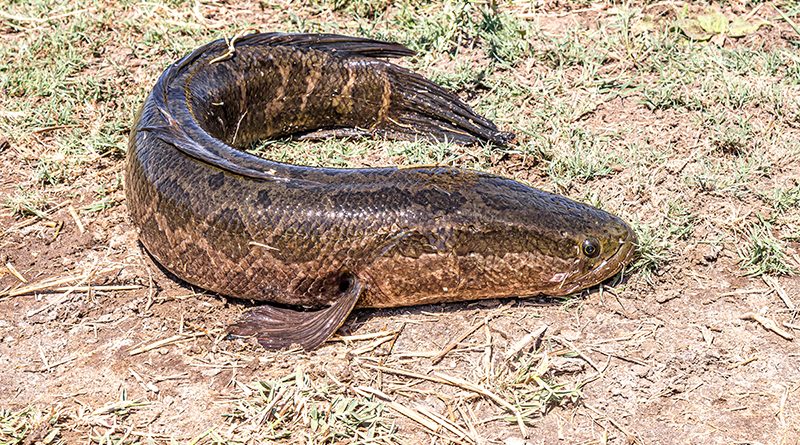 The snakehead fish was caught in water; however, this snake resembling species can crawl ashore and survive for days. Shutterstock image.

CANTON, MA- A rare and invasive fish species was caught in a Canton’s Reservoir Pond, about 40 minutes south of Boston. Michael Powell went out to the pond to fish for bass but was confused when he reeled in his bite to find a northern snakehead fish. The fish, also known as Channa argus, is native to Eastern Asia and Russia and has become an invasive species in Massachusetts. The fish was most likely introduced to Massachusetts through a fish market or illegal aquarium release, according to https://www.boston.com/news/local-news/2021/08/31/rare-invasive-snakehead-fish-caught-canton-reservoir/.

The website also notes that the possession and liberation of the fish are illegal in Massachusetts, https://www.invasivespeciesinfo.gov/aquatic/fish-and-other-vertebrates/northern-snakehead.

The aggressive, predatory fish is known for its ability to breathe outside of water, live on land for several days, travel by wiggling its body, and lay dormant in mud during droughts. The fish has a mouth full of sharp teeth and is very defensive towards its young.

Powell caught a five-pound, 30-inch-long fish, but the species can grow to be three feet and 19 pounds.

Powell turned the fish over to the Environmental Police, who asked him to keep the fish alive until the following day when they could come out and retrieve it. He filled a boat with water and kept the fish caged with plywood and cinder blocks.

“Did you see the teeth on that thing?” Powell exclaimed to friend Eddie Caraminas who was also out fishing that day, according to Boston.com on Aug 31.

“We had it out of the water for two hours while I was trying to figure out what to put it in, and as soon as we put it in the water, it let out a giant gulp of air, and it started breathing through its gills again, “ Powell told https://www.boston.com/news/local-news/2021/08/31/rare-invasive-snakehead-fish-caught-canton-reservoir/.