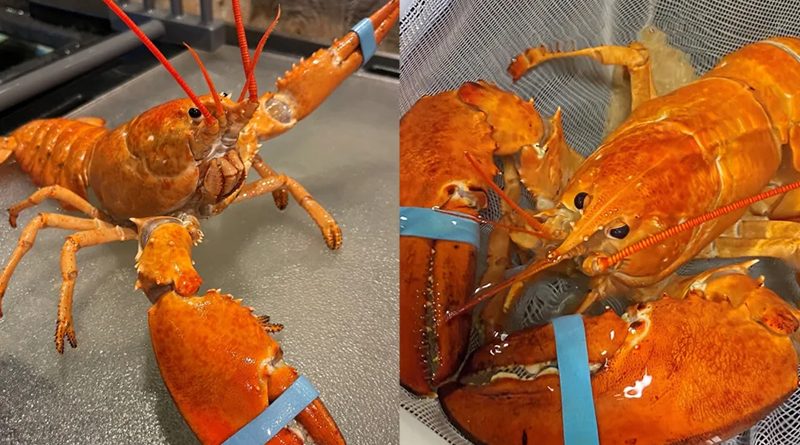 Biscuit (left) a second rare orange lobster was rescued from a Red Lobster, just weeks after Cheddar (right) was discovered in a shipment to the restaurant. Image courtesy of Red Lobster

Two extremely rare orange lobsters were rescued from Red Lobster in two locations within a month of each other.

On July 13, a team at a Red Lobster in Hollywood, Fla., was stopped in their tracks when they discovered a rare orange lobster in their daily shipment.

The team called Ripley’s Aquarium of Myrtle Beach, where the brightly colored crustacean was taken and lovingly named Cheddar after the restaurant chain’s well-known biscuits.

Less than one month later, on Aug. 9, Cheddar was joined in the news by Biscuit when a second rare lobster was found in Meridian, Miss., and sent to a new home at the Ripley’s Aquarium of the Smokies.

The discovery of the pumpkin-colored crawlies is considered a 1-in-30 million chance.

Lobsters normally have a dark exterior in hues of brown and grey with some red undertones, which made Cheddar and Biscuit stand out amongst the group.

Usually, lobsters colored this brightly are more likely to be spotted by predators and rarely survive in the wild.

According to the team at Ripley’s Aquarium of the Smokies, this bright coloration can be caused by pigments they ingest in their diet.

While the lobsters are rare, the team thinks they may not be as rare as once thought. The lobsters may be getting their color makeover from their localized diet where they are harvested.

Red Lobster told USA TODAY Biscuit is from the same fishing area as Cheddar, supporting the theory that this uptick in unusual coloration has to do with what the lobsters are eating.

A third lobster was found in a New York grocery store which has made its home in the Ripley’s Aquarium of Canada.

Ripley’s Aquariums and Red Lobster announced that they would be teaming up to study the curiously colored crustaceans to better understand the anomaly.

With Red Lobster’s access to daily catches and local fishermen, the aquariums will have better access to the clawed buggers.