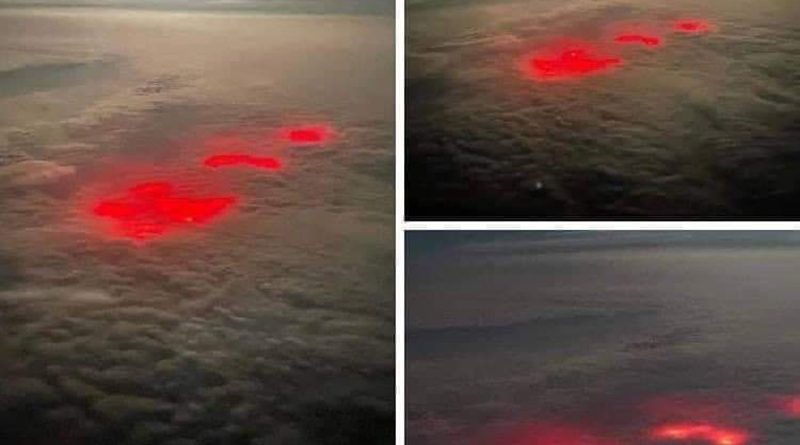 Mysterious red lights spotted while flying over the ocean strike a hot debate on the internet as to what the lights are. Credit: Reddit

What one Twitter user described as “Red sky at night, shepherds delight, red sky in the morning, global warming” were actually strange red lights spotted from a commercial plane over the Atlantic. The unusual scene had Twitter a flutter in July with theories ranging from global warming to Godzilla and the Upside Down.

A post on Reddit went viral in late July when a pilot took photos of mysterious red lights that seemed to be coming from the ocean surface while flying over the Atlantic and shared them on a Reddit forum under r/Damnthatsinteresting.

The internet then went to work to figure out whether those lights were the sign of the coming apocalypse or life imitating art with a rift opening us up to a new dimension like in the popular show Stranger Things.

“If I’m not wrong, the first DOOM game was set in 2022, so this is it. There comes the demons. There is the end…” said one Reddit user.

Like most things, there is an actual terrestrial explanation for the strange lights, fishing boats.

Commercial fishing vessels fishing for Pacific saury use LED fishing lamps to draw the fish to the surface. The vessels have LED lights that stretch the length of the ship to draw in their target fish.

According to Nature World News, LED fishing lamps are more effective and safer for fishermen because they produce less heat and ultraviolet light than filament bulbs.

In an interview with CNN, Neil Jacobs, Ph.D., weather modeling expert, told Jeanne Moos that the fishing vessels using the bright lights are most definitely the cause of the mysterious lights.

Jacobs told Moos that he entered the flight’s location and date into Globalfishingwatch.org and could see fishing vessels by name.

This is not the first time these lights have been called into question. A similar sighting was noted by a pilot traveling from Seattle to Japan in 2020, and there has been footage from the International Space Station of hundreds of fishing boats off the coast of Cambodia, according to Nature World News, meaning the lights can be seen from outer space.

This effectively solves the mystery of the spooky red lights.

Even though there is a logical explanation, the internet definitely had their fun speculating on the strange occurrence.