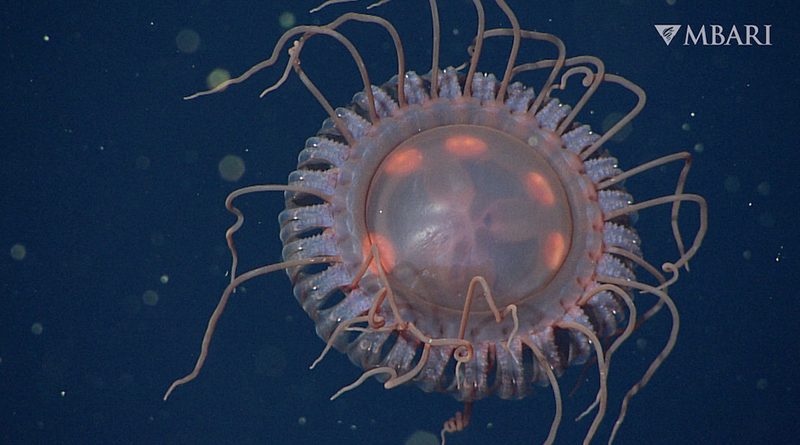 A new species of deep-sea crown jelly, Atolla reynoldsi, discovered by MBARI researchers and named in honor of Jeff Reynolds, the first volunteer at the Monterey Bay Aquarium, MBARI’s education and conservation partner. This individual was observed off Monterey Bay at a depth of 1,403 meters (4,603 feet) by MBARI’s remotely operated vehicle (ROV) Tiburon (now retired) in 2006. Credit: © 2006 MBARI

MONTEREY BAY—In a discovery conducted on March 16 by the Monterey Bay Aquarium Research Institute (MBARI) research team, Animals, scientists have uncovered an “unusual” new species of deep-sea jellyfish living in the waters off the California coast and have chosen to name it Atolla reynoldsi .

Scientists at the MBARI discovered the creature. It lives in the so-called midnight zone of the ocean – between one and four kilometers deep – a mysterious region where light only comes from animals that produce it themselves, and the pressure reaches 5,580 pounds a square inch.

The new jelly is a part of the Atolla family. One feature of the jellyfish researchers often use to identify Atolla is a single elongated or hypertrophied tentacle. One tentacle can stretch up to six times the diameter of the bell. Researchers believe this long tentacle helps capture prey; researchers in Japan suggest the single trailing tentacle helps a hungry Atolla catch siphonophores (rope-like gelatinous animals made of specialized segments).

The deep-sea crown jelly Atolla is one of the ocean’s most common midnight zone residents. Its bell has a signature scarlet color and bears one tentacle much longer than the rest. So, 15 years ago, when MBARI researchers spotted a jelly that looked like Atolla but lacked the telltale trailing tentacle, their curiosity was sparked.

Researchers have named their discovery Atolla reynoldsi in honor of the first volunteer at the Monterey Bay Aquarium, MBARI’s education and conservation partner, Jeff Reynolds.

“We named this stunning new species in honor of Jeff Reynolds in recognition of the 4.3 million hours of service that he and other volunteers have contributed to the Monterey Bay Aquarium over the past 38 years,” said MBARI Senior Education and Research Specialist George Matsumoto in the MBARI press release. “They have graciously given their time to educate the public about the ocean’s wonders. In addition, Aquarium volunteers have been instrumental in raising awareness about the fragility of the ocean and inspiring the public to care about the health of the ocean.”

Matsumoto and his co-authors believe two more previously unknown species of Atolla also live in the depths of Monterey Bay. They hope to include these new additions to Atolla’s family tree eventually.

Over the past 15 years, MBARI researchers have observed and collected specimens of three types of Atolla-like jellies that lack the typical trailing tentacle. In addition, researchers have collected sufficient details about morphological and molecular features to describe one of these three unique jellies.

A. reynoldsi is relatively large compared to other species of Atolla. The largest specimen MBARI researchers collected was 13 centimeters (5.1 inches) in diameter, making this newly discovered species one of the largest in the genus.

Like other deep-sea crown jellies, A. reynoldsi has a furrowed bell. A deep groove runs around the bell, separating the domed bell from the wide margin with thick segments, known as pedalia, containing finger-like lappets. The edge of the bell resembles a crown, earning this group of jellies its regal name. The “crown” in A. reynoldsi has warty papillae and spiked ridges. Only one other species of Atolla—A. chuni, known from the South Atlantic and Southern oceans—has a similarly bumpy bell. A. reynoldsi also has a distinct gut shaped like a Greek cross.

In addition to the lack of the hypertrophied tentacle, A. reynoldsi is often observed with its tentacles coiled. MBARI researchers have learned that the number of tentacles may not be a reliable diagnostic tool for identifying individual species of Atolla. Tentacle number varies considerably from one individual to the next, and the new A. reynoldsi can have anywhere from 26 to 39 tentacles.

The deep-sea crown jelly Atolla is found worldwide and can be abundant in deep water. MBARI’s archive has more than 27,600 hours of video containing thousands of observations of Atolla. To date, scientists recognize ten species in the genus. Atolla chuni, A. gigantea, and A. vanhoeffeni are the most recognizable; they have unique features that make them relatively easy to identify. But others, even the widespread A. wyvillei, can be rather difficult to identify. In addition, some characteristics thought to be species-specific have turned out to be less than helpful in separating the species.

“This is such an honor to have this new species named after me,” said Reynolds. “It also honors all the fantastic Aquarium volunteers over the decades. I was just the lucky one to be there so early on,” said Jeff Reynolds. “Volunteering and working for the Aquarium for 42 years was just such an awesome and rewarding experience. It was especially wonderful being taken in as a 16-year-old kid by mentors like [Aquarium co-founder] Steve Webster and Tom Williams to just do whatever needed being done at the moment, from vacuuming the floor to caring for stranded sea otter pups to assisting with whale necropsies to building exhibit models.”