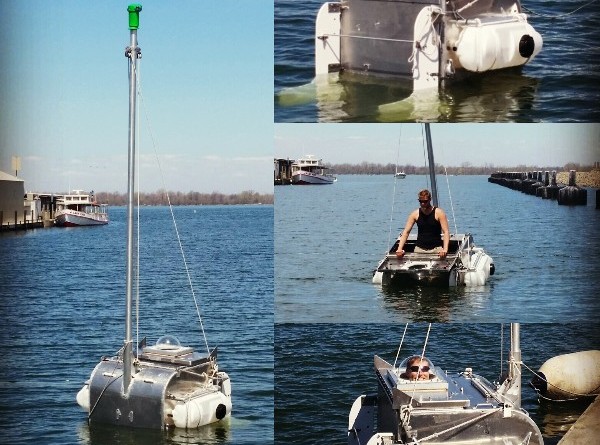 ERIE, Pa. (AP) – Most people opt to make a transatlantic sea voyage on a cruise ship.

Kent, a native of Portland, Oregon and 33 years old, has spent the past five years designing and building his boat named The Undaunted. Kent, who has been on the Niagara’s crew for eight years, is attempting to raise money for science-based education programs at The Bioreserve, a nonprofit in Glenmont, New York.

Kent estimates the project will cost about $20,000. He paid $3,000 for the aluminum used to construct his vessel. Three Erie-area businesses (Lake City Industries, Lewis Bawol Welding and American Cruising Sails) have contributed to his Atlantic voyage by donating extensive time and services to build, weld and outfit his boat.

Hugo Vihlen, a former airline pilot from Florida, currently holds the transatlantic world record. Vihlen sailed in 1993 from Canada to England in a sailboat measuring 5 feet, 4 inches in length.

Kent’s aluminum vessel is 3/16-inch thick above the waterline, 1/4-inch in thickness below the waterline and measures 42 inches wide and long. The height, from keel to top of cabin, is 7 feet, 6 inches.

The sailboat’s interior has plywood with a half-inch of padded, insulated foam anywhere below the waterline. Floorboards can be opened to access storage. On top of the cabin is a bulletproof Lexan polycarbonate bubble window covering the hatch from where he can look out to sea.

Kent’s sailboat has a 15-foot-high aluminum mast and weighs 420 pounds. Kent plans to add 720 pounds of lead as a keel shoe. He also expects to take 300 pounds of supplies (batteries, food and safety equipment) as well as a 320-pound, 40-gallon emergency water tank compartmentalized into 10-gallon sections.

Kent will produce his daily water from manual desalinated water makers. He will take 180 pounds of dehydrated food. He expects to lose about 20 to 25 pounds on the voyage.

Kent will do daily check-ins on his satellite phone and weekly phone calls. Marine safety equipment aboard will include an automatic identification system, a VHF radio for local communications and an emergency radio beacon.

“Probably my biggest safety concern is getting run over by some freighter,” Kent acknowledged. “It’s a sailing capsule more than it is a boat, so I can be pretty protected in there from almost anything.”

The 4,700-mile voyage will begin March 1, 2017 off the African coast and end three to four months later near Miami.

One thought on “Boat crossing might set new world record”