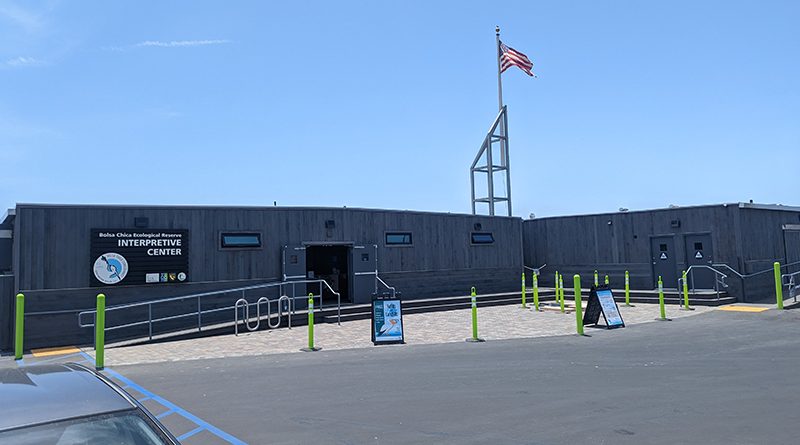 The reserve has about five miles of trails for visitors to walk through. Image courtesy of Whitney Thomspn.

The center was refurbished and reopened in April of this year and features several exhibits and educational opportunities.

HUNTINGTON BEACH— Serving as what CEO Patrick Brenden once described as the “grand entrance to the Bolsa Chica visitor experience,” the Bolsa Chica Interpretive Center sits at the entrance of the Bolsa Chica wetlands waiting for visitors to take part in the “big picture” of the wetlands.

The remodeled 1,400-square-foot center features several exhibits, including saltwater aquariums, a herpetology exhibit, and a microscope display that allows visitors to zoom in on the microscopic creatures which make their home in the wetlands.

The Bolsa Chica Ecological Reserve is approximately 1,400 acres and is one of the largest saltwater marshes in California. Visitors can walk five miles of trails or join the tour once a month on the second Saturday from 10 a.m.-12 p.m., which meets at the center.

The original center was built in 1994 and was initially only supposed to be in place for up to five years. However, after exceeding its life span by over 20 years, it was time for a remodel, which was completed and opened on April 2 of this year.

“Combined with being so near to the coast and the influence of salty air, the building had seen better days, and it was time to upgrade,” said Whitney Thompson, Senior Education Program Coordinator for Bolsa Chica.

The project took about five years to get off the ground between permits, fundraising, and construction.

“The new center was funded primarily by a grant from Prop 68 fund, and the State Wildlife Conservation Board, which granted us a $689,000 grant to use toward the remodel of our interpretive center,” said Thompson. “Beyond that, we rely on the generosity of corporate partners and individual donors to continue to maintain the interpretive center.”

Center staff say that in the five months since the ribbon cutting, the center has seen an increase in visitors.

“The interpretive center has been well-received by the public, and we’ve seen an overall uptick in visits as folks come to see the results of the remodel,” said Thompson.

The center is home to the saltwater exhibits previously mentioned. Species featured in the exhibits are up to change throughout the year but currently, the exhibits house various species of sea stars, a California spiny lobster, kelp bass, opal eye, and a few juvenile swell sharks.

“Within the interpretive center, we have exhibits about the history of Bolsa Chica, and how the wetlands came to be how they are today, as well as ecosystems and native species found in and around the Bolsa Chica Ecological Reserve,” said Thompson.

The center also has an interactive touchscreen that shares a wide variety of information about Bolsa Chica, from a timeline of its history and habitat restoration to more information on protected and endangered species, which call the 1,400-acre reserve home.

In an interview at the ribbon cutting, Brenden called the center a legacy for the community and hoped it would foster future conservation efforts. He said he hoped the center would be around for the next 50 years.

“Into the future, we’re hoping to continue to educate the public about the importance of coastal wetlands like the ones we have at Bolsa Chica, as well as inspiring the next generation of environmental stewards, and we hope our new interpretive center will be a core part of that mission,” said Thompson.

The center is open from 9 a.m.-4 p.m. every day. Information on the Conservancy’s mission and short or long-term volunteering can be found at www.bolsachica.org.