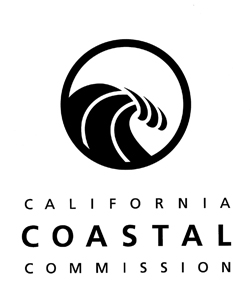 Dayna Bochco succeeds Steve Kinsey at the helm on the dais.

Kinsey, who also serves on the Marin County Board of Supervisors, was chair during one of the most tumultuous periods of the commission’s history. In February the commission ousted Charles Lester as its executive director. The ouster was quite controversial, with a large contingency of groups and constituents opposing the decision.

The commission was also under fire for its practice of meeting with third parties privately (called ex parte meetings).

Most recently, the commission rejected an application to develop Newport Beach’s Banning Ranch, one of the largest stretches of open land in coastal Orange County.

“I do think some significant things have been accomplished during these last few years,” Kinsey said, recognizing the commission’s efforts in addressing sea level rise and protecting orcas.

Bochco and Turnbull-Sanders assumed their respective roles immediately after the election of officers.

The commission’s new chair said she will not accept ex partes during her tenure and will work to improve the agency’s relationship with the media.

Commissioner Roberto Uranga was appointed to serve as chair of the Santa Monica Bay Restoration Commission; he succeeded Bochco.

Commissioner Mark Vargas will continue serving as a member of the Santa Monica Mountains Conservancy.