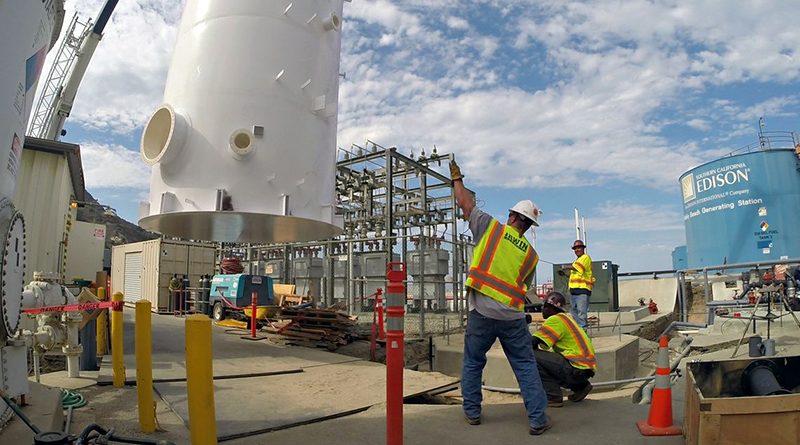 SCE built the first desalination plant in response to the development of the nearby Hamilton Cove condominiums and the drought in the late 1980s.

SCE has a standalone and permanent treatment plant, built in 2016 in response to the past and current emergency drought conditions faced by Catalina Island.

“The second plant is highly efficient, producing twice the water using the same amount of energy as the first,” Ron Hite, SCE’s senior manager for Catalina, in a news release for SCE.

The desalination plant produces drinking water that serves customers in the City of Avalon. It pumps directly into the customer distribution pipeline system, flowing to the various residents, visitors, hotels, and restaurants.

“The desalination plant is generally in continuous operation,” said Brian Leventhal, a spokesperson for Southern California Edison. “Since it’s a mechanical process, it does experience some downtime to perform routine maintenance.”

According to Leventhal, desalination makes up approximately 40 percent of the total island water supply. In the rare event that the Middle Ranch Reservoir (Catalina’s sole surface water reservoir) experiences enough rain to create a reservoir overflow condition, desalination production may be temporarily curtailed. Throughout the last 10 years, the reservoir experienced an overflow condition 10 percent of the time.

Operating a water utility on an island that works as Catalina does, means customers cannot access water resources on the mainland, so desalination is a critical tool to strengthen Catalina’s drought resilience and water security.

“As recently as 2014-2017, Catalina customers faced severe water rationing due to persistent drought conditions,” said Leventhal. “Although Catalina is especially vulnerable to drought and water supply shortages, it has not always rationed water. The water supply availability is characterized by a 4-stage mandatory water conservation and rationing plan.”

Customers must ration their water use only when in Stage 2 or greater.

Over the last 20 years, water supplies exhibited no shortage 63 percent of the time.

-stage 2, seven percent of the time.

-stage 3, five percent of the time.

Therefore, rationing has been in effect for roughly 2.6 years out of the last 20 years (which is 13 percent of the time frame).

“We have now experienced two different drought emergencies in the last 10 years, which reinforces a need for greater water supply resiliency [through desalination],” said Leventhal.

One of the consequences of drought is that SCE and Catalina have seen multiple restaurants only offer bottled water. When in stage 1 or greater, restaurants are restricted from providing water unless a patron requests it; consequently, many restaurants have adopted a bottled water service. Later stages may help the business achieve its water rationing requirements.

In addition, streets are swept rather than washed to conserve water, and hotels pay extra to take laundry to the mainland to clean to conserve the island’s water. In addition, accommodations are asking visitors and guests to conserve in as many ways as possible.

Islanders do their part to conserve water by having saltwater toilets and planting low-maintenance plants, like succulents. But it becomes more of an issue as summer generates an increase in activity on the island.

“We’re about 4,000 people on a year-round basis, but we get up to a million visitors a year, and so, of course, that impacts a lot of our infrastructure because we have these visitors and thank God we do because we’re an entirely tourist-based community,” said Avalon Mayor Anni Marshall in an interview with ABC7.

SCE is working to improve desalination production by 80 percent by adding a third well as the next part in their phase to enhance desalination. The third well would let the treatment plant operate at a higher capacity.

According to Frank Beach, SCE’s senior supervisor of water and gas utilities on Catalina, SCE produces as much as 160 gallons per minute, which also helps fight climate change and drought impacts on the community. Beach believes this is an excellent benefit of the desalination plant because it’s a drought-resistant resource, and the filtration process makes economic and environmental sense.

Before the desalination plants, Catalina relied entirely on groundwater and the water collected in reservoirs from light seasonal rains for its drinking water. The island resorted to bringing additional drinking water in by barge during significant droughts, while residents and businesses have endured strict water rationing.

The island is always in need of drinking water, especially as summer approaches, and brings in tourism as hotels, shops, and restaurants become busier.

“The community may face challenges in sustaining the travel-based economy during extended or frequent periods of water rationing,” said Leventhal.

According to Leventhal, some environmental sensitivities regarding desalination plants generally involve sea life trapped in water intake systems. However, this is not an issue in Catalina because the SCE intake system is fed by coastal wells that have natural sand filtration systems; therefore, sea life is not affected by their intake systems.

In addition, desalination on Catalina allows SCE to reduce groundwater extractions, which in turn provides more fresh water supplies for the environment, creating an ecological benefit.

“This fresh water can be used for local flora and fauna as well as island ecosystems,” said Leventhal. “The desalination plant is regulated by two primary agencies, which helps ensure there are no negative impacts on the environment as a result of its operation. The Division of Drinking Water regulates the drinking water quality and treatment process. The California Regional Water Quality Control Board regulates the concentration of salt water that returns to the ocean.”

SCE recently entered into grant funding agreements with the California Department of Water Resources, which will reimburse costs totaling $12.3 million toward desalination enhancement projects, helping save money for customers.