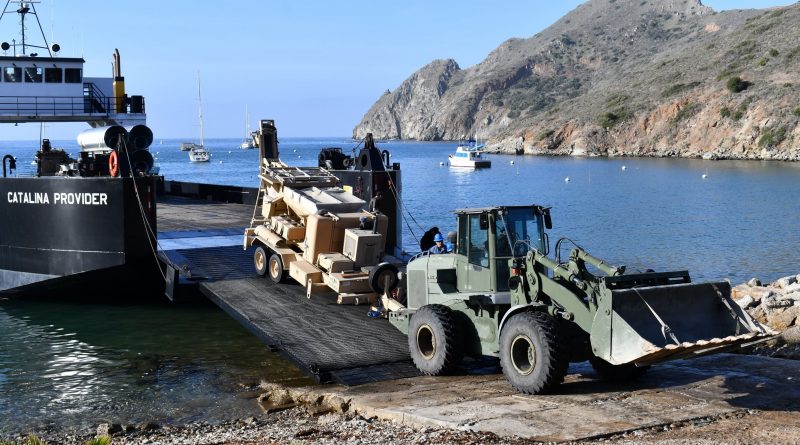 CATALINA一 On May 25 the Catalina Island Conservancy waved off the United States Marine Corps’ 3rd Marine Aircraft Wing after a six-week project to restore sections of Catalina’s roadways.

The project was in partnership with the Department of Defense Innovative Readiness Training (IRT) and restored vital sections of Catalina’s roadways that were determined to be vulnerable to sediment loss and damage from erratic weather events.

Some of the roadways that were under consideration are the only roads to certain parts of the island, making them vital for the sheriff’s department, fire department, and other services to get to residents.

“The roads are critical to the island and some portions are the only way to get from one part of the island to another,” said Tim Kielpinski, chief operating officer of Catalina Island Conservancy.

The project was given a four-week time slot which meant that the conservancy had to narrow down their list of repairs to the top five priority areas; the marines ended up staying six weeks.

The initial application was submitted in the fall of 2019 and planning picked up speed in Dec. 2020, surveys were done to pinpoint the most vulnerable areas; plans were made for repairs, and the logistics for funding and transportation were hammered out.

The conservancy provided the material for the project and the Marines provided the equipment and labor, they restored five culverts and approximately 1.5 miles of road.

The team used a mixture referred to as “soilrete” a mixture of cement, dirt, and rocks that were blended together and used as a base for the road, the roads keep their dirt road aesthetic but are sturdy and should hold up for many years according to Kielpinski.

The Marine Wing Support Squadron 373 out of Miramar deployed almost 50 Marines and equipment out to Catalina and used the project to carry out essential training and had the added impact of providing critical improvement to the island’s infrastructure.

“To be able to come out and do this kind of work and leave a legacy – an imprint in something that helps the civilian population on Catalina Island – is special,” said Lieutenant Colonel Kurt A.Boyd, MWSS-373 Commander, in a May 25 press release. “The Marines came out and did an engineering project on the roads and culverts, but for MWSS-373 as a whole, it was much bigger. Working on an island presented unique challenges that needed to be solved, so my entire staff was involved in making sure this engineering project came together. It was an incredible opportunity.”

This is the second project that the conservancy has done in conjunction with IRT, the first was the 2019 runway repair project at the Catalina Airport. Kielpinski said it was such a success that they immediately placed the application for the roadways after the project’s completion.

Repairing the roadways has an ecological and practical significance to the island by improving water management and mitigating damage, this, paired with the benefit of outside practical experience to the marines created a symbiotic relationship for both parties.

“So again the roads are critical to what we do and sustaining them from an ecological standpoint and a usability standpoint is just really valuable for us,” said Kielpinski. “…We got to ask how many of [the marines] is this the first time operating your equipment outside of training… where they really had to navigate a situation, it was really cool seeing the improvement in the young marine skills…The lieutenant and the gunnery sergeant said they saw an improvement in their Marines…great training for them and it was great for Catalina.”