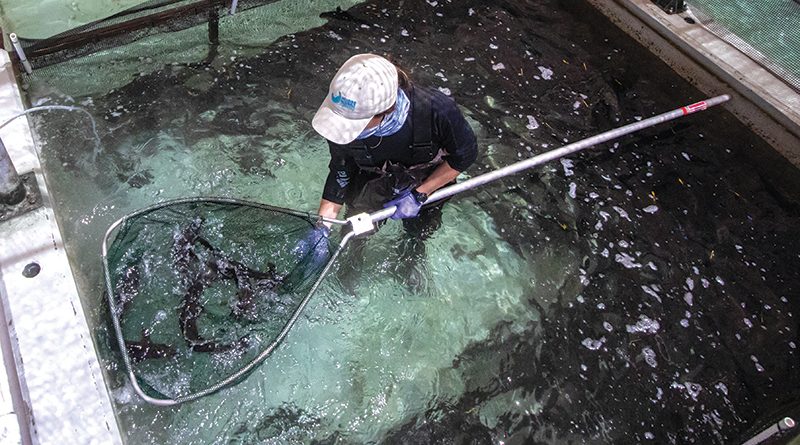 The hatchery is set to release 100,000 fish from grow-out pens up and down Southern California this year. Hubbs-Seaworld Research Institute Aquaculture Photo

The fish are spawned and reared at Carlsbad’s Leon Raymond Hubbard Jr. Marine Fish Hatchery. They are tagged with a coded wire tag implanted in their cheek, no larger than a grain of rice, and then sent to grow-out facilities along the coast of Southern California, where they will reach between eight to ten inches before being released into the wild.

OREHP is managed by the California Department of Fish and Wildlife. The Hubbard SeaWorld Research Institute acts as a contractor through their hatchery in Carlsbad.

Transporting the fish from the hatchery to a grow-out facility, a cordoned-off area of the harbor surrounded by a net, allows the fish to acclimate to their environment and provides a cost-efficient way to raise the fish to a larger size before releasing them into the population.

“What we’ve seen is that fish we released from our grow-out pen tend to survive a little bit better than what we call, a naïve fish, directly from the hatchery,” said Michael Shane, Director of Fisheries Enhancement at Leon Raymond Hubbard Jr. Marine Fish Hatchery. “So, the few months these fish are spending in these pens, they are getting undomesticated. They are learning the smells of the environment and potential predators that may swim around there.”

The bass are expected to stay in the pens until November of this year, when they will be released into the wild to join the population; the program releases roughly 100,000 white sea bass a year from San Diego up to the Channel Islands.

During this trip, 26 adult white sea bass from the wild population were caught to add to the genetic diversity in the breeding stock.

Once transported to the hatchery in Carlsbad, the fish will undergo a 45-day quarantine in special tanks before being released into the breeding tanks.

This program is a collaborative effort between the CDFW, OREHP, HSWRI, and volunteers from the Coastal Conservation Association of California who supports the grow-out facilities.

“I think it is important to note the support for this program comes from the Department of Fish and Wildlife. We are contractors to the department,” said Shane. “The Coastal Conservation Association, they are the ones that are coordinating all these volunteer grow-out sites and helping us with the funding and the program, and they are big supporters of the program.”

The OREHP has seen the release of over three million juvenile seabass throughout the past 30 years.