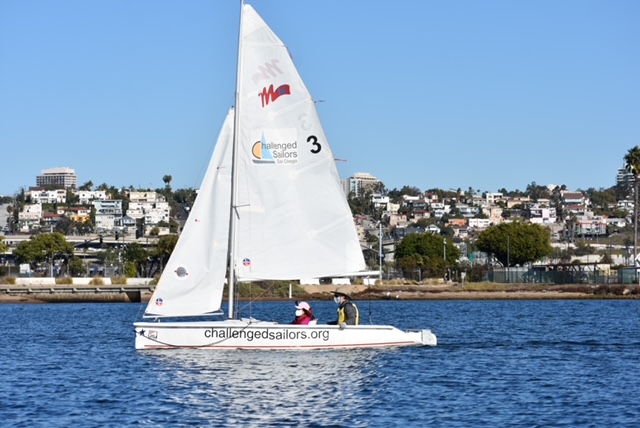 Challenged Sailors San Diego will get back on the water the weekend of Feb. 12 with a new boat and a Mid-Winter Regatta Feb. 27 and 28. 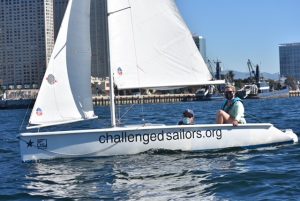 The San Diego-based non-profit has a fleet of eight Martin-16s and their new SKUD-18 that are designed to allow people with physical disabilities to operate and sail a boat on their own.
“They are isolated in a bucket seat and all the lines come right to them, the sheet the halyards, the trim lines. Everything is within arm’s reach while sitting down, that is the only difference between the Martin and other boats,” said Dennis.
Sailors and volunteers are paired together and will hit the water a couple of times a week. Dennis said that pre-COVID they were on the water 100 times a year mainly on Friday and Saturday.
COVID changed the times but these sailors are ready to get back on the water on Feb. 12 when Challenged Sailors San Diego re-opens with new COVID precautions.
Sally Beach, who runs social media as a part of the outreach team, listed off precautions that the non-profit would be taking to ensure the safety of their sailors like temperature checks and mandatory masks.
“We are opening the weekend of the [Feb.] 12 and 13 with COVID protocol, we do have a lot of protocol in place right now,” said Beach.
The non-profit is getting right back into the fray with their Mid-Winter Regatta on Feb. 27 and 28, held at the Coronado Yacht Club.
While sailors do not have to race if they choose not to, there is a healthy spirit of competition at Challenged Sailors San Diego that lends itself to some exciting races. 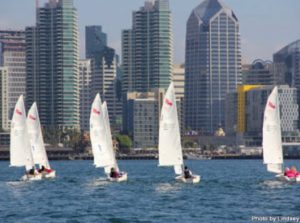 e a challenge; they broke something in the spine or the neck but other than that they are just as good as anyone else.” said Dennis.