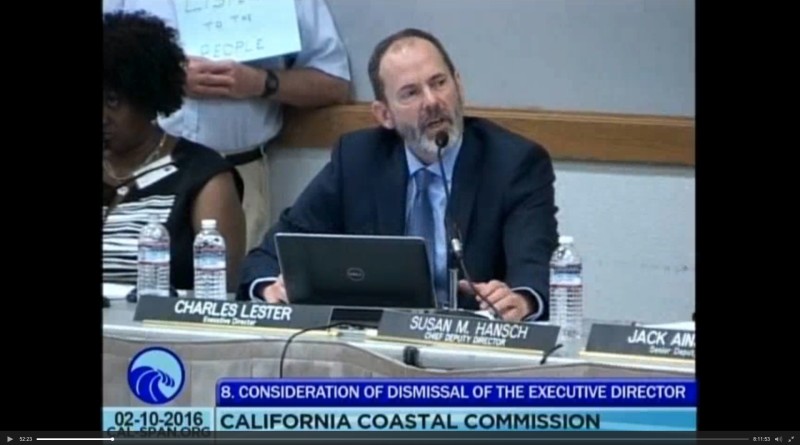 STATEWIDE — A public agency tasked with protecting California’s coastline enters its ninth month without a leader at the helm as the California Coastal Commission continues to search for a successor to Charles Lester.

A draft job posting released by the Coastal Commission on Aug. 26 states the agency is looking for “a dynamic leader confident in their ability to spearhead positive organizational and cultural change.”

A survey seeking public input of what characteristics the next executive director should possess is currently available online at coastal.ca.gov/events/ed-search/.

Recruitment materials have not yet been finalized.

“Right now we have posted a draft of the draft recruitment materials and are currently accepting public comment on the [executive director] search criteria,” Noaki Schwartz, the commission’s public information officer, told The Log. “The language in the draft brochure may be updated and is expected to be considered [in] October. Once the materials are finalized and posted, we will begin to accept applications.

The executive director manages and supervises 167 staff members in seven offices, recommends regulatory actions, and oversees implementation of the commission’s Strategic Plan (which, ironically, was adopted during Lester’s tenure).

“The Executive Director serves as the California Coastal Commission’s chief executive officer and is appointed by and serves at the pleasure of the voting members of the Commission. The Executive Director has comprehensive executive responsibilities for management, statewide policy formulation and implementation, program development, and administration of all aspects of the Coastal Commission’s work mandated by the Coastal Act.”

Review of candidates is expected to begin on Dec. 5.

The successful candidate is expected to have knowledge and experience of environmental, land use and coastal policy experience. Administrative and organizational management experiences, an advanced degree, and at least 10 years of relevant work experience – including five-plus years in a senior managerial role – are also required.

The new executive director would earn between $152,964 and $160,608 annually; the compensation package also includes retirement, health, dental and vision insurance, and leave allowances.

Submissions and inquiries could be sent to Pam Derby at CPS Executive Search; the phone number is 916-263-1401. Information is also available online at cpshr.us/search.

In a 7-5 vote commissioners voted to relieve Lester of his executive director duties. The vote was conducted behind close doors and no reason was given for his dismissal.

Hundreds of people testified to the commission in favor of retaining Lester during the Feb. 10 hearing to determine his fate. Many argued Lester was an environmentalist who helped protect the California coast from being sold to developers.

Public trust in the Coastal Commission diminished after Lester’s firing, with his supporters questioning whether the agency would, by easing certain requirements, allow developers to build waterfront projects at the expense of environmental protections and public coastal access.

Updates of the commission’s executive director search is available online at coastal.ca.gov/events/ed-search/.