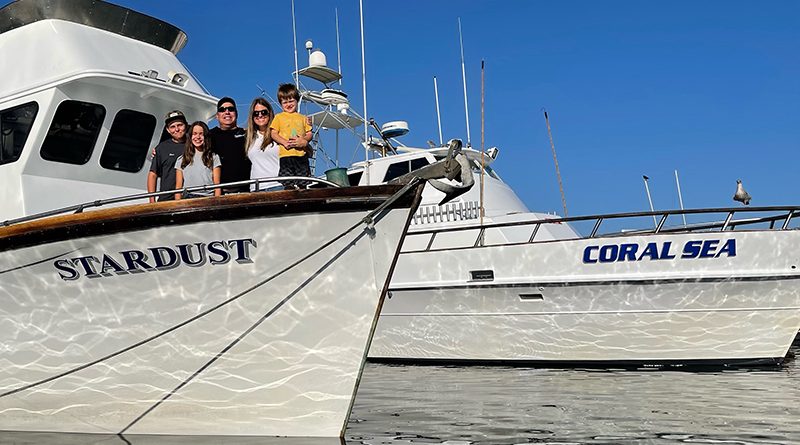 The Diamond family board the 65’ Stardust out of Sea Landing located in the Santa Barbara Harbor with Coral Sea right next to her. Image provided by Jaime Diamond.

The California Air Resources Board has proposed amendments to engine regulations requiring Tier 4 engine technology and advanced retrofit emission control devices in Commercial Harbor Craft applications as well as other operational control strategies for reducing emissions; the proposal has created a commotion throughout the commercial boating community.

SAN DIEGO- An alliance of associations representing marinas and harbors has raised safety concerns associated with the untested technology that will be enforced for commercial passenger boats, specifically sportfishing, whale watching, eco-tourism, and dive boats several weeks before the California Air Resources Board (CARB) is expected to rule on the controversial harbor craft engine emission regulations.

Jaime Diamond and her husband have owned Stardust for 25 years and Coral Sea Sportfishing for six years, in Santa Barbara, California.

“We’re a small business. It’s just my husband and I and our three kids,” said Diamond. “My husband has had Stardust here since 1996, we bought the Coral Sea in 2015. To say we have to scrap our vessels- which means if this goes through our vessels will have no resale value and then we would have to go out and spend a minimum of $4 million per vessel to build new boats to accommodate the proposed equipment it’s just not possible. We will be out on the streets.”

Diamond and her husband have vessels made of wood and fiberglass, which would not be accommodating for CARB’s new engines seeing as they run too hot and pose a fire hazard. The new mandate would require the Diamonds to rebuild their vessels to be made entirely of steel.

“CARB has admitted that the diesel particulate filter (DPF) unit that will have to be mounted in the boat runs too hot and it is not safe to operate on a wood or fiberglass vessel,” said Diamond. “So that’s why we would have to build steel vessels to accommodate this. The problem also is the Coast Guard has not approved this equipment and because I carry passengers, I cannot do something to my boat that Coast Guard has not approved and especially being where I am in Santa Barbara, we are very sensitive to anything safety related after the Conception incident.”

In Sept. 2019, the Conception, a 75-foot commercial vessel based in Santa Barbara Harbor caught fire killing one crew member and 33 passengers. Ultimately, the cause of the fire was due to failure to provide oversight of the vessel and poor maintenance.

CARB’s recommended engine regulations require commercial passenger boat engines to be rigged with new engines and DPFs, which have not been tested on passenger vessels. These engines are classified in Tier 4. They do exist; however, they have never existed in a marine environment. The technology has also not been certified by the United States Coast Guard, which regulates passenger vessels. DPFs found on trucks and farm equipment have been known to create robust heat and severe back pressure on engines, according to a press release put out by River City Communications President Marko Mlikotin. Boat captains and harbormasters are worried that blocked exhaust systems may not be as manageable on the sea as they are on land.

“Trucks are currently operating with this engine but in a truck if the filter clogs, it can pull off to the side of the road get out and call for a tow,” said Diamond. “For a boat there are passengers whose lives and safety rely on the boat owner. We are out at sea and if that filter gets clogged, we are a disabled vessel out in the water. You can’t just say ‘okay everybody hop off and wait on the side for help.’ The possibility of the engine catching fire opens the possibility for boats to crash into other vessels or jetties.”

“We don’t see a path towards compliance with the way the vast majority of the fleet is constructed,” said Ursetti. “With CARB’s aspirational rule making, the technology doesn’t exist. In a nutshell, it means the engines that CARB is requesting our boats to retrofit with, we have a problem. Number one, that size of engine doesn’t exist. It’s a smaller engine that is rated tier four that we would need and that doesn’t exist yet for the marine market. Tier four engines do exist for the marine market but their larger horsepower engines, so we find those in tugboats, but not for what we need for our passenger carrying vessels.”

“CARB has developed engine emission technology that is untested and not proven to be safe at sea, and perhaps what is most concerning is that CARB has proposed regulations without consulting the United State Coast Guard, the authority on safety-at-sea issues,” said Eric Endersby, Harbor Director for the City of Morro Bay and a board member of the California Association of Harbor Master and Port Captains in the press release. “If a tractor-trailer stalls or catches fire, a truck driver can pull to [the] side of the road and call 911. This, however, is not a safe option for passenger vessels in the dynamic offshore environment. A likely scenario for this technology is exhaust systems will clog, and vessels will drift at sea for hours as crews try to fix the problem, or worse, they will have minutes or even seconds to spare as they attempt to regain control of their vessels before foundering on rocks, beaches or attempting to traverse harbor entrances. It is easy to imagine a host of life-threatening circumstances at sea caused by this untested and unproven technology, especially in high winds and seas.”

CARB’s regulations call for engines to be modified and or replaced with technology that has not yet been developed for commercial passenger fishing vessels. In most cases, the modifications will be too large to fit into existing engine rooms. This issue will lead to the loss of jobs, community whale watching, and access to fishing boats for those looking to sport fish with a cheaper budget. This prompted the California State University Maritime Academy to conclude that the suggested standards for existing engines do not exist. In the alternative, “… treatment equipment (modifications) alone significantly impacts the vessel’s stability.”

CARB concluded that vessels constructed of wood and fiberglass would probably be removed from service. Over 80 percent of commercial passenger boats are built of wood and fiberglass, according to the press release put out by Mlikotin. This would require boat owners to purchase new metal boats beginning in 2023 or go out of business as extensions expire, Mlikotin continued.

California is one of America’s premier fishing destinations. California has over half a million people a year fishing from sportfishing boats, supporting coastal communities, marinas, and small businesses dependent on outdoor tourism for economic activity, jobs, and tax revenue. Before the COVID-19 pandemic, California’s over 2 million anglers contributed $5.6 billion a year in economic activity and supported nearly 40,000 jobs for our State.

The mandate will induce other consequences as well.

“During the traditional school year, schools will participate in marine science education programs,” said Ursetti.  “During whale watching season we take those programs and apply that to the eco-tourism sector and those are affordable fieldtrips for school districts. We can’t do that if we have to go out and build a $5 million boat. We would no longer be able to offer those programs to schools or certain economic demographics. Those programs will now be three to four times more expensive than they currently are if not more.”

Ursetti worked on projections for fishing trips that would support a new build for his boats that would follow CARB’s current iteration of this rule. The projection was anywhere from a 150 to 250 percent increase in fairs as a starting minimum. Currently, a half day fishing trip costs $65, the increase would bring the fare up to $163.

“Basically, what we have to do per this rule is build a boat around the machinery, and also if there were to be a new build it needs to be future proof meaning able to accommodate technology that doesn’t exist,” said Ursetti.

Diamond is rooted in Santa Barbara, and if the mandate is followed through with, that could mean relocation for her and her family.

“For long term, we really don’t know what our options are,” said Diamond. We don’t know what technology is going to come out; all we can do is hope that something better will come out quicker than they are anticipating. We are not in a position to scrap our boats and build steel vessels. We would probably be closing and then moving. We have lives established here… we have three kids. I’m an elected member of our school board; we’re really community involved people. All our roots are here.”

On Nov. 19, the California Air Resources Board (CARB) will conduct a public hearing to consider the proposed amendments to the Commercial Harbor Craft Regulation in effect on Jan. 2023.Currently, CARB is listening to public comment, until Nov. 15. Nov. 19 was supposed to be a two-day meeting where CARB would listen to testimonies and pass the rule, however, because it has been so highly contested, it is assumed to become a one-day meeting, according to Ursetti. CARB has announced that they will hear public comments and then readjourn in Spring 2022 to pass the final rule making.