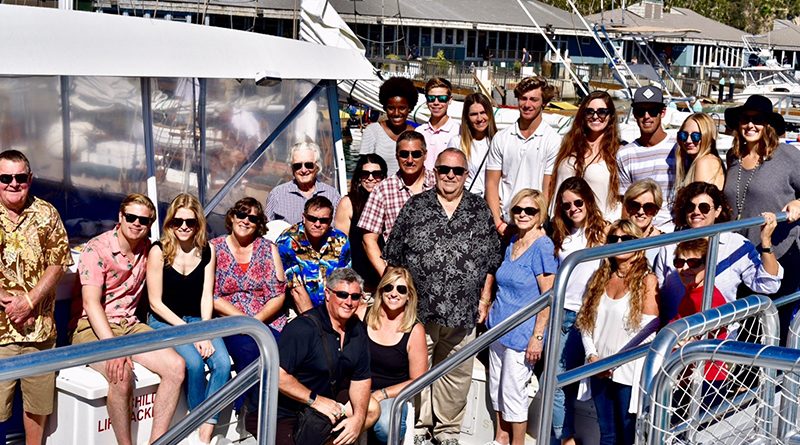 Hansen, center, was a community leader and active member of the Dana Point Community. The plaque and plaza are meant to remember his dedication and legacy to the harbor. Image provided by Donna Kalez

Hansen grew up on the water and was a prominent member of the Dana Point community and an advocate for the harbor.

DANA POINT— On Aug. 3, the Dana Point Harbor Partners invited the community to a plaque dedication for the Hansen Plaza in honor of Dana Wharf Sportfishing and Whale Watching founder Don Hansen.

Hansen, a well-loved member of the Dana Point Harbor community and surrounding areas, passed away in January of this year at the age of 87.

The planned plaza, which will serve as a reminder of Hansen’s legacy and dedication to the harbor and community, is part of the harbor revitalization, which is fast approaching, a project 20 years in the making to revitalize and renew the harbor for locals and visitors.

“I wanted something, along with the community, to kind of immortalize the great legacy that Don Hansen left in not only Dana Point and the region but certainly in Dana Point Harbor,” said Fifth District Supervisor Lisa Bartlett. “We wanted a sitting tribute to him and his accomplishments and his contribution over the many decades within Dana Point Harbor.”

Hansen was an avid supporter of the harbor and an advocate for the ocean. He spent his early years on the ocean out of San Clemente, where he moved as a young child from Iowa. He returned to the beach town after his military service during the Korean War. He worked at San Clemente Sportfishing, running a charter boat before eventually buying the business in the late 60s.

Hansen then moved the business to Dana Point Harbor when the harbor opened in 1971, becoming the first tenant on the wharf and locating his business near the mouth of the breakwater.

“Don Hansen started Dana Wharf Sportfishing, and his business was the very first business in the 70s in Dana Point Harbor,” said Bartlett. “So, he was very well loved in the community. He was a good friend of mine and was loved by the community at large.”

For 50 years, Hansen actively participated in Dana Point Harbor and the surrounding area serving on several boards and committees for the betterment of the ocean and the community, including Chairman of the Pacific Fisheries Management Council and the Revitalization Task Force for Dana Point Harbor and County of Orange.

Hansen was also the founder of the Dana Point Festival of Whales, which celebrated 51 years in the spring.

The popular festival celebrates the annual migration of gray whales as they pass through Dana Point. Hansen’s work inspired others and fostered a love for marine life in Dana Point.

Hansen’s daughter Donna Kalez, COO of Dana Wharf Sportfishing and Whale Watching, and Giselle Anderson, co-owner of Captain Dave’s Dolphin and Whale Watching Safari worked together to have Dana Point trademarked as the Dolphin and Whale watching capital of the world and then applied to have it designated a Whale Heritage Site. Dana Point received the designation in 2019, becoming the first site in North America and the fourth in the world.

“It is important to us that visitors and future generations know Don Hansen’s story and the legacy he left behind,” said Bryon Ward, president of Burnham-Ward Properties and a partner of Dana Point Harbor Partners. “This plaque will be incorporated into the Harbor revitalization to ensure his legacy will live on forever through the Hansen Plaza.”

Hansen has a list of awards and accomplishments, from his ocean advocacy to his community work, all of which have left a mark on Dana Point and a lasting legacy for his family and friends.

“I just want to thank the partners for the follow through,” said Kalez. “This is also part of our journey to revitalize the harbor. As you know, my father spent 20-plus years trying to get the harbor revitalized and supported the partners and the projects from day one. This is kind of coinciding with that construction beginning on the harbor, and hopefully, this is a new beginning, and we are just really excited to be a part of it and carry on his legacy.”

Hansen Plaza will be located near the Dana Wharf Sportfishing and Whale Watching location. He will be honored with a plaque sharing his story and accomplishments with visitors, which will be placed in the plaza.

“His legacy is whale watching and sportfishing and taking children out on the water to experience and to better understand our oceans and foster responsibility and sustainability, so he would just love all of this,” said Kalez.