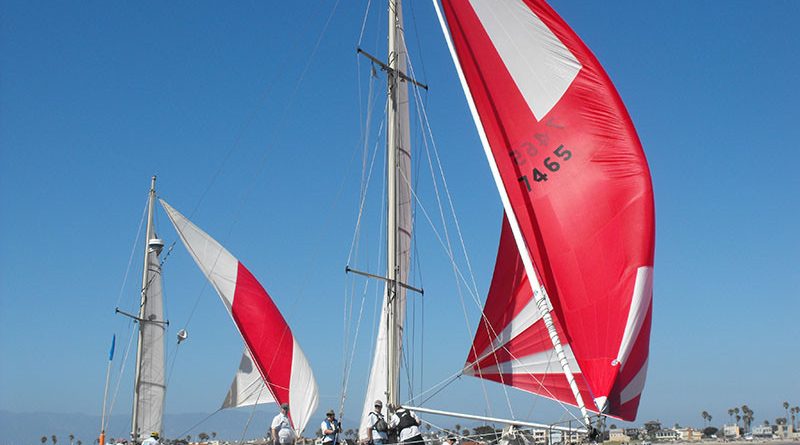 This year would have marked the 44th consecutive running of the race, but the pandemic got in the way.

Dick McNish, who the regatta is named after, is well known up and down the coast as a real gentleman sailor.

“I purchased her in 1980 and I am only the sixth ‘owner’,” said McNish. “You never really own a classic, you take care of it until the next person takes it over.”

McNish started sailing when he was a child out of Santa Barbara Harbor, although he has sailed other boats over the years, Cheerio II has been with him for every race for the past 41 years.

“In honor of this man who lives the Corinthian spirit and has continued to promote classic yacht racing,” said then Pacific Corinthian Yacht Club Commodore Patty McInnes.

McNish was honored and quipped, “It’s a very nice honor to have something like this named after you when you’re still
alive.”

The regatta is specifically designed for these classic wooden yachts with a 17-mile triangular racecourse starting offshore of the Channel Islands Harbor break wall.

The course includes rounding oil Platform Gina to starboard, a long reach to the #2 red navigation buoy at Ventura Harbor and then a reach to round the spar buoy to port offshore of the Mandalay power station, and a downwind run to the finish inside the break wall at Channel Islands Harbor.

“The race is a pursuit start with the slower boats starting first, this way most of the fleet crosses the finish line close together. And, with good wind we get a great downwind chute run,” stated McNish. “It also ensures a great time back at the club with everyone arriving so close together.”

Forty-three years later, he is still racing with his longtime friend, Walter Russakoff, also 94, who has the distinction of never missing a McNish Classic, having sailed all of them usually on his self-built 39.8-foot cutter Vignette II, but this year, he sailed with McNish on Cheerio II.

After sailing and racing Cheerio II from 1980 to 1994 the boat went down for a time for reconstruction so McNish could continue to sail her.

“It was time to put in all new planking and new decks,” explained McNish, “We decided against caulking all the planks, we instead glued them together like on a piece of wood.”

Cheerio II, which was originally built in San Pedro has a yawl that is 56-feet overall, it is twelve feet wide with a draft of six feet.

In the McNish Classic in 2011, the crowd that gathered on their boats to watch the downwind finish, inside the Channel Islands Harbor break wall, were wondering where was Cheerio II?

It was sad to see that McNish and crew had to abandon the race. The yawl had suffered a broken main mast caused by a snapped Norseman fitting at the top of the mast during the first leg of the race.

“It was very disappointing to have to leave the race, but no one got hurt and that’s what really counts,” said McNish at the time.

This year the race had only 10 yachts participating. As usual, McNish took it in stride.

“I just thought, well, with the pandemic and all, people just got out of the habit,” said McNish.

McNish expects to have more sailors competing next year, since so many still love the classic. McNish and his crew raced in the 2019 Newport to Ensenada regatta finishing first in their PHRF (Pacific Handicap Racing Fleet) Class.

“I was very happy that we won first place and received the Ensenada Chamber of Commerce Trophy for our efforts,” McNish said.

People often ask McNish why he continues to race at his age.

“Why not? I like it because you are on your own out there, we race but we don’t go that fast so it is relaxing,” said McNish.