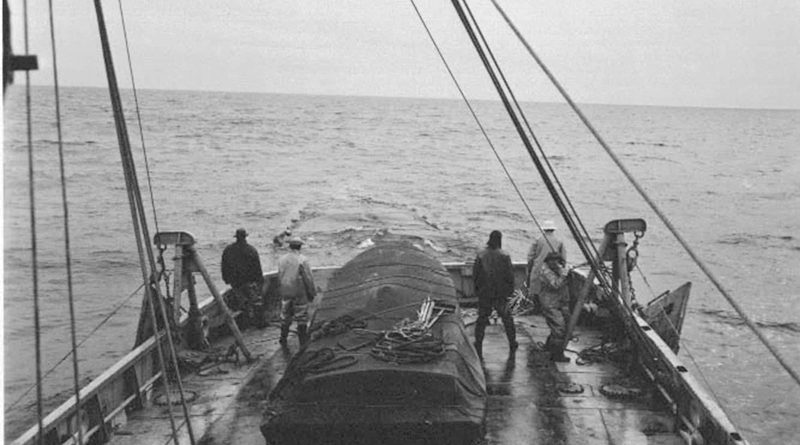 After two exploratory missions conducted by the newly found Fish and Wildlife Service (FWS) Exploratory Base in Seattle in the Bering Sea, the discovery of the big market for king crabs sparked the construction of the vessel Deep Sea, who set out for her first venture on May 29, 1947.

Before Deep Sea was built, the Washington, an exploratory vessel built for FWS had returned from the Bering Sea on October 23, 1948, after completing Exploratory Cruise # 1.

Her assignment was to explore the waters of the Northeastern Pacific. However, after experiencing her performance out on the water, the Washington would have had to undergo a significant renovation to become a successful exploratory vessel. So, the decision was made to design and build a research vessel instead. It would be a year and three months until that vessel became available on Feb.18, 1950, as the R/V John N. Cobb, commissioned at the Oceanography dock at the University of Washington.

Meanwhile, the project had to continue without a research vessel. So then, the M/V Deep Sea was chartered for Cruise # 2, which was a bottom fish exploration of the Bering Sea, commenced June 24, 1949, and ended July 5, 1949, to complete what the Washington had initially set out to achieve.

The FWS had been involved with Lowell Wakefield, the president of Deep-Sea Trawler Inc. and owner of the chartered M/V Deep Sea. His father, Lloyd Wakefield, became interested in reports of king crabs from the FWS reports of the surveys of 1940 & 1941. The Wakefields had a 35-foot trawler built in Seattle. They took it north to Kodiak to experiment with methods of catching, processing, and preserving king crab at their herring plant at Port Wakefield on Raspberry Island, northeast of Kodiak. By the end of the war, Lowell had developed a company called Deep Sea Trawlers.

The company decided to have a seaworthy vessel built to work in the remote and treacherous Bering Sea, where the FWS had found an abundance of king crabs.

Before the war, the Japanese had shown a market in the U.S. for canned king crab, and Wakefield’s experiments done in Alaska during the war determined that frozen king crab quality was better than canned. They had a Tacoma, WA. shipyard build a 140′ Atlantic side trawler that could process king crab, which was the beginning of Deep Sea’s missions.

Deep Sea Trawler Inc. asked the FWS to supply an expert to accompany the vessel as an observer and adviser. That person was Boris O. Knake, a Fishery Engineer from the FWS Technological Laboratory, Boston, who had expertise in east coast side trawling, net repair, trawl design, and knowledge of fish processing. He was aboard the vessel from the start of this first voyage in the Bering Sea to when he boarded the FWS Brown Bear on June 20, 1947, to return to Boston. He suggested several modifications that he felt should be considered. As a result, he was invited back on the fourth voyage, arriving in Seattle on Feb. 6, 1948, and working with the crew getting the trawls modified to fish king crab. Knake was aboard the vessel when she departed Seattle on March 16, 1948, and remained aboard until May 12, 1948, when he got off at False Pass and headed back to Boston. The vessel planned to continue fishing in the Bering Sea until November before returning to Seattle.

Then on April 24, 1948, the Pacific Explorer fleet reported good fishing in the Bering Sea. And finally, after making good catches of king crab, the Deep Sea headed for False Pass after picking up the mail from the Pacific Explorer. The two operations were in contact with each other.

The 1949 charter with FWS came at a good time for both groups. The Exploratory Base finished off the exploration of the Bering Sea northwest of the area where fisheries were being conducted. In addition, it gave Deep Sea Trawlers Inc. the knowledge of the unknown regions and helped them financially.