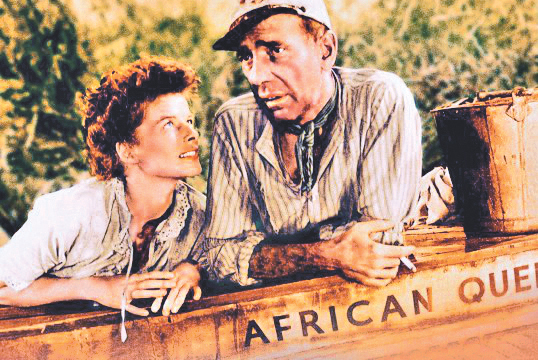 Actor Humphrey Bogart has long been associated with a famous misquote (he never said “Play it again, Sam”) and one of the most recognized Hollywood romances of all time (Lauren Bacall). His name also continues to live on in the boating and sailing world.

The one-time Best Actor winner (“The African Queen”) ditched Warner Bros. in 1948 and launched his own production company – a rarity for a Hollywood actor in those days. Bogart named the company, Santana Productions, after his sailing yacht.

Santana, a 55-footer built in 1935, claimed the Schooner Trophy in the 1938 Newport-to-Bermuda race and was featured in the 1948 film “Key Largo.” Bogart reportedly purchased Santana for $50,000 in 1945 and owned it for the remainder of his life. He spent many weekends taking Santana to White’s Landing or Cherry Cove at Catalina Island.

In 1948, the actor pitted Santana against 104 other vessels in the Newport-to-Ensenada race. Bogart made headlines after the race when he, his wife (Bacall) and three others visited Coronado Yacht Club.

“Younger looking than on the screen, Mr. Bogart was tanned from the recent week at sea, racing with 104 other craft from Newport Harbor to Ensenada,” a Coronado Compass reporter wrote about the Bogart-Bacall visit on May 4, 1948.

One year later, Bogart donated a perpetual trophy to the Pacific Coast Collegiate Sailing Conference’s women championships. It has been awarded 27 times since 1949, most recently in 2014 to Madeline Kennedy and Katrina Berry of the University of Hawaii.