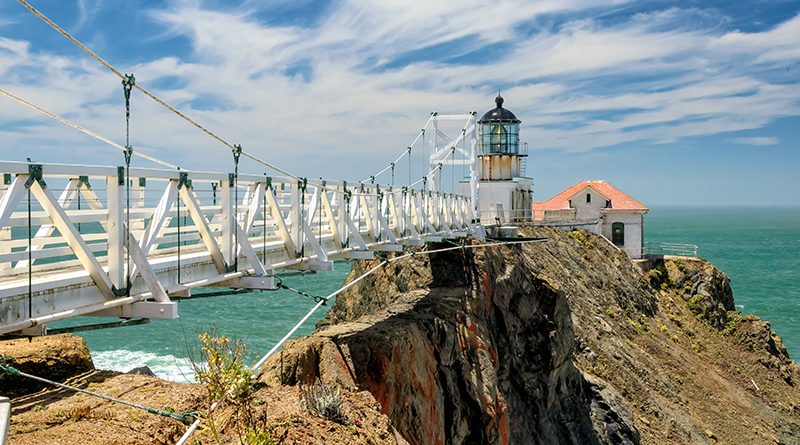 The Point Bonita lighthouse is open to visitors two days a week, there is a half-mile steep trail to get to the suspension bridge leading to the lighthouse. Shutterstock image.

SAN FRANCISCO⸺ On May 2, 1855, the third lighthouse to be built on the West Coast lit up the sea to guide ships through the waters of San Francisco Bay. San Francisco was put on the map after it was dubbed the main port for gold seekers looking for their fortune during the California Gold Rush, which began in 1848.

The lighthouse was the third lighthouse on the West Coast, originally built on a ridge 300 feet above the water in 1855.

Point Fort lighthouse was constructed on the southern edge of San Francisco Bay, but another lighthouse was needed north of Golden Gate Bridge; that site became Point Bonita.

By 1877 the lighthouse was moved to a new site at a lower elevation to combat the thick fog. A tunnel and trail were built as well as a new three-room brick structure to support the upper half of the original lighthouse.

The lighthouse uses a Fresnel lens, developed by Augustin Fresnel in 1822. The system uses ground glass prisms arranged in rings around a light source; Fresnel’s system bends 70 percent of outgoing bulb light and focuses it horizontally.

To reduce the cost of construction, Point Bonita’s prisms were installed only on the ocean side. Hikers can see the gap in the lens on the cliffside when they come down the trail.

The lighthouse relies on two factors for navigation, visibility, and acoustics. Each lighthouse has its own pattern to distinguish between the points—Point Bonita’s light switches on for three seconds and off for one.

Because of the heavy fog, which can disturb the light, there are also acoustic cues. The first was a canon, which would fire a warning shot, and it was replaced in four years by a fog bell. In 1874, a steam siren was installed. Today the lighthouse uses an electric foghorn.

The lighthouse is still active today and is part of the Golden Gate National Recreation Area. The lighthouse is maintained by the U.S. Coast Guard and is open Sunday and Monday from 12:30 to 3:30 p.m. For more information, see the National Park Service website at nps.gov.