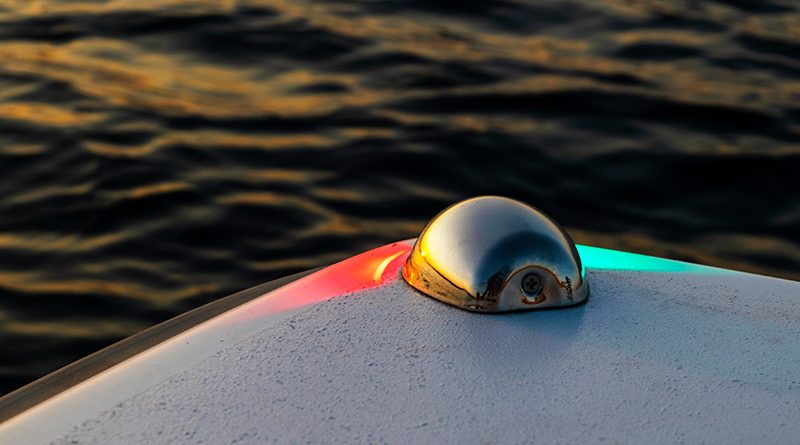 These sidelights can also be referred to as combination lights. The red light is always port side, and green is always on the starboard side of the vessel. Shutterstock image.

UNITED STATES— Those lights at the bow of the boat aren’t just Christmas decorations, they play a very important role on a boat.

In 1838, The United States passed the Admiralty Law, also known as the maritime law, which is a combination of U.S. and international laws. Under this law it is required that steamboats operating between sunset and sunrise must carry one or more signal lights; color, visibility, and location were not specified. The consideration of the law came after numerous vessels crashing due to weak visibility of one another during hindered lighting.

In 1848, the admiralty exercised these powers and finalized the requirement of displaying red and green sidelights as well as the white masthead light above, and the all-around white light when anchored, as confirmed by maritime attorney, David Weil. Today, navigational lights aboard ships are determined by the International Maritime Organization. They have established a criterion for light requirements based on the size and make of the vessel.

The red and green lights are called navigation lights and they help other boaters determine which vessel needs to give the right-of-way when crossing paths in the dark. These navigation lights must be displayed from sunset to sunrise, or when visibility is restricted out on the water.

The red and green lights are one of four important navigation lights on a boat, and they are also called side lights. Side lights must be visible to other boaters on either side of the vessel, which allows the other boater to determine if the vessels are approaching each other head-on. The red light indicates a vessel’s port side, which is the left side, and the green light indicates the vessel’s starboard side, which is the right side. These lights help vessels pass each other safely when daylight is not an option.

Other navigation lights include the sternlight, a white light seen only from behind or close behind a vessel; the masthead light which is a white light the shines forward on both sides of the vessel. Masthead lights are a requirement on any power-driven boat. Absence of this light would indicate to other boaters that that vessel is a sailing vessel. The last navigation light is the all-round white light. This light is required on boats powered by an engine that are less than 39.4 feet and serves as an anchor light when sidelights (such as the red and green lights) are extinguished.