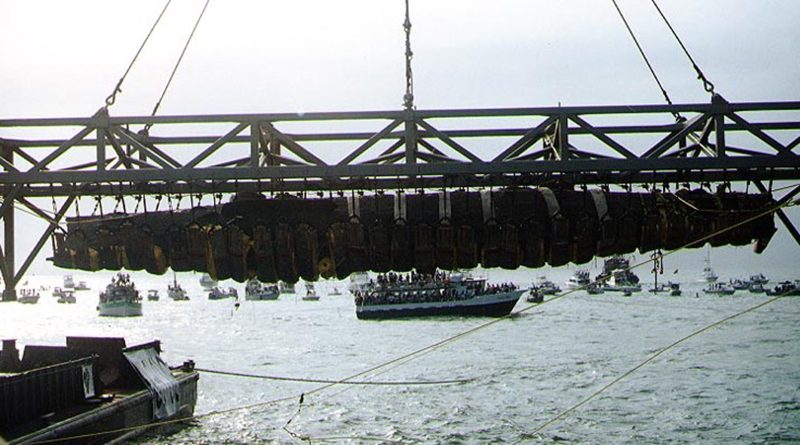 CHARLESTON, S.C.- On Feb. 17, 1864, the Confederate submarine, the H.L. Hunley sunk the USS Housatonic, a 16-gun, 1,240-ton sloop-of-war, while it was blockading the entrance to Charleston Harbor; the Hunley became the first submarine to sink an enemy warship during wartime, according to the Naval History and Heritage Command website.

In 1863, Horace Lawson Hunley financially backed the construction of the Hunley for the Confederacy.

The submarine was built by Park and Lyons in Mobile, Alabama, and was constructed from rolled iron boilerplates with custom cast iron fittings.

The submarine was powered by a hand crank which took seven men to handle and an eighth man to steer the vessel.

The Hunley was launched in July 1863 for a demonstration in the Mobile River, sinking a coal-hauling barge anchored in the river.

The submarine dove under the vessel and released a torpedo that hit its mark, impressing several high-ranking officials, including

The Hunley was then sent to Charleston on Aug. 12, 1863, to assist with the blockade of the harbor; on Aug. 29, 1863, the vessel sunk at the dock while preparing to launch its first attack.

Five crew members were killed in the first sinking, and it took weeks to recover the submarine. In this time, Hunley arrived and demanded control of the vessel.

On Oct. 15, Hunley scheduled a demonstration where the ship would dive beneath the CSS Indian Chief and resurface.

The vessel disappeared for several weeks before being discovered in the harbor channel with its nose buried in the mud; all on board were lost.

After weeks of debate, the submarine was passed to Captain George Dixon and a volunteer crew who would spend the next two months preparing the vessel for another mission.

On Feb. 17, the sea calmed just enough for the crew to embark on their last mission; at approximately 8:45 p.m., the submarine approached and sunk the Housatonic, according to the Hunley website.

The submarine approached the ship and detonated a torpedo just below the surface creating, a hole. It took less than five minutes for the Housatonic to sink; Dixon signaled back to shore with two blue lights to indicate the mission was successful, and the men on shore lit a fire to guide the ship back to shore, but the Hunley never made it.

In 1995, the Hunley was discovered by preservationists off the coast of Charleston; the submarine was raised intact in 2000, where it was taken to North Charleston’s Warren Lasch Conservation Center. The Hunley is currently on display at the center in North Charleston, South Carolina. For more information, visit the Hunley website at https://www.hunley.org/.