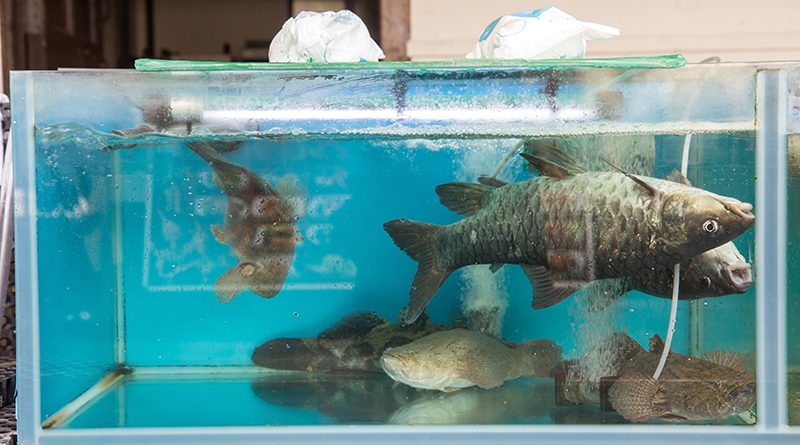 Different diseases will display in various forms on and in a sick fish. However, when a fish is sick, its appearance and behavior will noticeably change. Shutterstock image

While we linger in flu season, it’s a reminder that we aren’t the only ones who get sick– so do fish. But is it something for anglers to worry about? In addition, here is what to look for and the effects a sick fish can have on humans, the environment, its habitat, and the fishing industry.

For those who had a fish tank as a kid, it’s highly likely that your aquarium fish got sick at one time or another. That could have been ich, the visible white spots on your fish, their lack of buoyancy, or their balance. Unfortunately, when we are in control of the fish’s habitat, we sometimes make mistakes that cause the fish to get sick. But what about in oceans, rivers, and lakes where anglers fish?

Well, fish in the wild can indeed get sick, but it is not so much of a concern for anglers since sick fish tend to be less active and less likely to bite lures or bait. According to The CDFW’s Fisheries Veterinarian, Kevin Kwak, the clinical signs of sickness in wild fish are very similar to what happens to aquarium fish at home.

“Some other clinical signs I would add are lethargy, color change, flashing (where they are scratching themselves), and open wounds,” said Kwak in an email from Dec 29. “Different diseases can manifest differently during an outbreak. There can be other factors that decrease survival. Some of these factors can depend on the type of pathogen/disease infecting the fish, the severity of the infection, where on or in the fish the infection/disease occurs, the age of [the] fish, environmental conditions, the ability in finding shelter, and avoiding predation.”

“There are a wide variety of illnesses and issues that can occur – just as with other living organisms,” said Peter Tira, information officer for CDFW. “Sometimes it is species or site specific – such as parasites that can infest fish in a certain body of water. The only illness that seems to be newsworthy at the moment is a thiamine deficiency impacting Chinook salmon. This stems from a lack of thiamine or Vitamin B1 in their diet, and we mostly see the ramifications when they spawn and in their offspring. Not something anglers would notice necessarily, but it’s impacting wild salmon reproduction.”

Most fishermen have caught fish with evidence of diseases such as infected eye sockets, fins, gills, or body sores. This can often raise concerns about the health of the lake and its fish, yet rarely is this concern merited. These organisms all exist in healthy ecosystems, just as in terrestrial environments, and some fish will always be found with disease.

“There are some pathogens that can be transmitted to humans (zoonotic disease), but this is rare,” said Kwak. “Practicing good hygiene, such as washing your hands after handling a fish, using gloves, and cooking fish thoroughly, will minimize your risk. You should also follow any public announcements/postings (such as heavy metal warnings, domoic acid closures, etc.) related to fish/shellfish and guidance from the Department of Environmental Health Hazard Assessment (DEHHA). If there is any question, contact your physician and make sure to give a thorough history, including what you recently consumed or touched.”

However, sick fish can cause other problems that might not have been considered. According to Kwak, if there are threatened or endangered fish in the ecosystem, they become at risk for infection and potentially dying. If it is a massive die-off, this can be unappealing to the public, and the odor can become a nuisance. This event can also attract other animals to the area. These animals can transfer pathogens (attached to their hair, feathers, or in their feces) to different ecosystems that are not yet infected. The rotting fish carcasses can also worsen the water quality or provide opportunities for other pathogens, like some bacteria, to increase their presence.

People can unknowingly transfer pathogens to other bodies of water, especially to freshwater ecosystems. For example, pathogens can attach to waders or other fishing equipment and catch a ride if the angler goes to another body of water or the gear doesn’t dry out before their next outing. This remains true for boats that take on water and aren’t completely dried out before the next body of water it’s used in.

“Some fish have learned to live with some infectious pathogens like Lernea (anchor worms),” said Kwak. “Anchor worms are external parasites that can be found in lakes and reservoirs. When rainbow trout start spending more time in warm water columns within a lake, they can be parasitized with Anchor worms. This infection can be unsightly since the fish develop external sores that angler sees when they catch the fish. However, they typically do not contaminate the meat, and the fish can be consumed.”

But when the lakes and reservoirs cool down in the winter, the incidence of infection dramatically decreases and is reported less. Therefore, this pathogen can be present with reduced concern for fish, the ecosystem, and its habitat.

Sick fish can also be an indication that something is off balance, according to Kwak. It can be water quality issues, water temperature, food availability, or a new pathogen and/or predator. There can be multiple factors to consider. Thus, it is essential to do a thorough investigation. For example, anchor worms can indicate that the water temperature is overall warmer if earlier and later reports of infected fish are recorded.

Seeing one sick fish doesn’t necessarily mean that a whole population or ecosystem is affected. When multiple sightings are reported, then your concern would be greater. If you find a concern, take clear pictures and make a report with a thorough history. Fish investigations are difficult and time-sensitive. Fish samples start to deteriorate once the fish dies, and frozen samples limit the examination and exclude some of the diagnostic tests used.

One of the most common disease problems encountered by freshwater game fish is generically referred to as “red sore disease.” The red sore disease is a generic term that describes the physical condition of fish rather than referring to a specific disease agent. Fish most frequently affected are game fish, particularly bluegill (bream), largemouth bass, and striped bass and their varying species. The condition is observed in fish from natural waters, recreational fishing ponds, and commercial aquaculture facilities. This problem usually occurs in the spring and fall, and fishermen and pond owners are often concerned by the appearance of red ulcers and sores on their fish. Typically, “red sore disease” is caused by two organisms, Aeromonas hydrophila, a bacterium, and Heteropolaria sp. (formerly Epistylis sp.), a protozoan.

Both of these organisms are found in healthy aquatic environments and are capable of causing disease. Red sore disease will often run its course, and fish may recover without treatment. The primary concern is often not the mortality of fish but the anglers’ rejection by the affected fish because of the diseased appearance. Occasionally red sore disease can reach epidemic proportions, contributing to significant mortality (more than 10 percent) of game fish, but this is rare.

Another type of bacteria that causes disease in fish, reptiles, and other amphibians is mycobacterium marinum, a non-tuberculous mycobacterium. This germ is found in freshwater ponds and aquariums and can infect humans and animals through contaminated water when exposed to injured skin. All fish are susceptible to mycobacteriosis. This disease is typically slow growing in fish but can affect some fish more quickly. Affected fish may show no signs of illness or stop eating, lose their fins or scales, develop sores, or appear deformed.

To prevent getting sick from an infected fish, remember to thoroughly wash your hands with soap and water before and after handling fish.