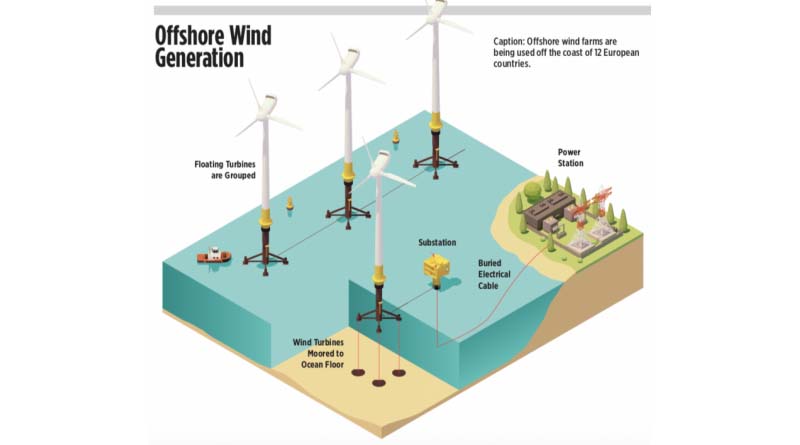 Pacific Coast Federation of Fishermen's Association's released statement called for answers about the effect of wind power would have on the environment and fishing industry off the California coast.

NORTHERN CALIFORNIA— On May 25 the Pacific Coast Federation of Fishermen’s Association released a statement opposing the federal and state government’s push to expedite the process of producing offshore wind energy off the
California coast.

The Biden-Harris administration released a statement on May 25 sharing that the Departments of the Interior and Defense along with the State of California had agreed to accelerate the production of wind energy on the central and northern parts of California’s coast, and in an answer, the PCFFA released their own statement that voiced concern over what has been perceived as a lack of answers and research into the clean energy method and the exclusion of the fishing industry in the decision-making process.

“The Pacific Coast Federation of Fishermen’s Associations (PCFFA) remains concerned about rushing unproven technology, with unknown impacts to our ocean ecosystem, in locations which were not identified with any meaningful input by the fishing industry,” said Mike Conroy, PCFFA’s executive director in the May 25 press release. “Floating wind turbines
have not been deployed in the scale being considered off the California coast. Far too many questions remain unanswered
regarding potential impacts to marine life which is dependent on a healthy ecosystem. For example, potential impacts to upwelling, potential impacts of noise generated by construction and operation of an industrial offshore wind farm, and impacts of electromagnetic fields on pacific coast salmon stocks, other important commercial and recreational fish stocks, marine mammals and seabirds are all still unanswered.”

State and federal governments have identified two areas off the coast to build the prospective wind farms, Morro Bay
and the Humboldt Call Area.

“I believe that a clean energy future is within our grasp in the United States, but it will take all of us and the best-available
science to make it happen,” said Secretary of the Interior Deb Haaland in the May 25 press release from the Biden-Harris
administration. “Today’s announcement reflects months of active engagement and dedication between partners who are committed to advancing a clean energy future. The offshore wind industry has the potential to create tens of thou-
sands of good-paying union jobs across the nation, while combating the negative effects of climate change. Interior is proud to be part of an all-of-government approach toward the Biden-Harris administration’s ambitious renewable energy goals.”

The project is part of the administration’s goal to create jobs through the deployment of 30 gigawatts of offshore wind by 2030 and California’s goal of carbon-free energy by 2045; these new developments would bring 4.6 GW of energy to the grid and potentially create 25,000 constructions jobs and an additional 7,000 jobs in communities support by the development according to the May 25 Fact Sheet released by the Biden-Harris administration.

Currently, there is one wind farm off the coast of Rhode Island with 30 megawatts of electricity capacity with plans for more along the East Coast of the United States and there are currently 12 European countries that have offshore wind energy projects as of the end of 2020, according to the U.S. Energy Information Administration.

The Bureau of Ocean Energy Management is hosting a virtual California Intergovernmental Renewable Energy Task Force meeting on June 24, the meeting is open to the public.

However, the meeting will be held the same day as the June Pacific Fishery Management Council.