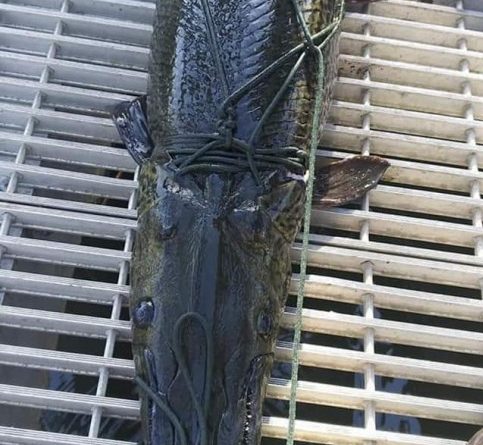 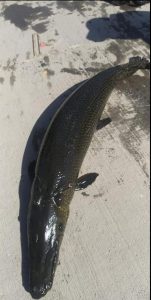 LONG BEACH一A couple of anglers were surprised to find an alligator gar at the end of their line in a Long Beach riverbed in early April.

“It was a 30-minute fight to get this bad boy on land,” said Cody Linder, one of the anglers, in an April 16 Facebook comment. “It was spotted over a year ago and a fishing buddy of mine finally pulled it out! Forty-seven inches of alligator gar in a Long Beach riverbed runoff. One heck of a fight!”

Alligator gars are marked by a torpedo-shaped body, olive/brown coloring, and armored scales. Their appearance is similar to that of an alligator giving the freshwater fish its name.

The gar is a freshwater species and considered one of the largest freshwater fish, reaching up to 350 pounds and over 10 feet in length, according to an article in National Geographic.

Alligator gars are native to parts of the Midwest and southeastern parts of the United States and historically not native to Southern California waters, making this a strange find.