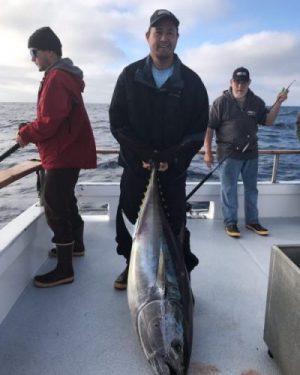 Southern California offshore anglers have been enjoying some fine spring fishing, but the past several days have seen unsettled weather conditions get in the way of anglers being able to get out to the offshore banks to fish areas where the bluefin tuna and yellowtail have been biting. The weather is improving though and today there are some boats back out on the offshore fishing grounds that are finding success once again targeting bluefin and yellowtail.

Prior to the recent stretch of bad weather, there were good numbers of bluefin tuna biting out by San Clemente Island for boats working the region of the 381 Spot which is located off the back side of the island outside of China Point. The 381 Spot is located at 70 miles, 260 degrees from Point Loma. Most of the bluefin were in the 18 to 60-pound range with some bigger fish in the mix that were going to 200-plus pounds.

Seaforth Sportfishing reported getting an early update from Polaris Supreme that is out on a 1.5-day trip. They had 9 bluefin tuna aboard, and that 8 of the bluefin were in the 100 to 205-pound range. Polaris Supreme was still fishing at the time of that report.

Point Loma Sportfishing reports getting an early update from American Angler that had 6 bluefin tuna aboard that ranged in size from 120 pounds to 224-pounds. American Angler was still fishing at the time of their report.

Boats fishing offshore waters within 45 miles or so of Point Loma had been finding good numbers of kelp paddie yellowtail and a few bluefin tuna biting while fishing areas such as the Upper Hidden Bank, the 371 Bank, the 230 Spot, the 302 Spot, the 224 Spot, the 182 Spot, the Corner, the San Clemente Basin Weather Buoy, and the 43 Fathom Spot. This is a wide area that had boats spread out fishing areas ranging from 15 to 45 miles 185 to 260 degrees from Point Loma. The banks outside of Los Coronado Islands such as the Upper Hidden Bank, 371 Bank, 230 Spot, 302 Spot, and 224 Spot were the best. The yellowtail found around kelp paddies were ranging in size from 5 to 15-pounds and most of the bluefin in this sector were in the 18 to 60-plus pound range.

Bluefin have been located by finding sonar marks, meter marks, spots of breezing fish, spots of breaking fish, and spots of working birds. Once bluefin are located they have been biting well on Flat Fall jigs, Colt Snipers, flylined sardines, and sardines fished with a 4-ounce torpedo sinker.

The fishing around Los Coronado Islands has been good for a mix of yellowtail, barracuda, calico bass, bonito, reds, lingcod, and an assortment of rockfish. A recent fish count posted aboard San Diego out of Seaforth Sportfishing saw 24 anglers on a full-day trip catch 41 yellowtail, 17 calico bass, 10 barracuda and 52 rockfish. Seaforth Sportfishing reports that San Diego was having success with the yellowtail while using flylined sardines and surface iron. Good choices for surface iron for yellowtail and barracuda include Salas 7X lights and Tady 45’s in blue and white, mint and sardine colors.

Productive yellowtail areas have been the South Kelp, the north end of South Island, the Lighthouse at the south tip of South Island, the Middle Grounds and the weather side of North Island. Yellowtail have been located by finding sonar marks, meter marks, spots of fish under working birds, trolling strikes on deep diving Rapalas and slow trolled sardines.

The bottom fishing around Los Coronado Islands continues to be good and some of the best spots have been at the hard bottom to the northwest and north of North Island in 30 to 50 fathoms. Also productive have been hard bottom spots to the northeast and the east of North Island in 20 to 30 fathoms as well as fishing along the outside dropoff of the South Kelp Ridge in 25 to 50 fathoms.

The fishing along the San Diego County coast has been good for a mix of rockfish, reds, whitefish, sculpin, sand bass, calico bass and an occasional bonus lingcod, yellowtail or halibut.

The best area for a chance at a yellowtail along the San Diego County coast has been fishing off the upper end of La Jolla. There have been occasional showings of yellowtail in the area and if you are fortunate enough to be at the right spot at the right time when some yellows decide to show, there has been a chance at hooking a 15 to 25-pound class yellowtail. Surface iron, yo-yo iron and slow trolled mackerel have been good choices to try for the occasional yellowtail hookup with surface iron usually working best when cast to breaking fish.

Productive hard bottom and structure areas for the reds, rockfish, whitefish and lingcod are the Imperial Beach Pipeline, the International Reef, the Whistler Buoy and the Dropoff outside of Point Loma, the Point Loma Pipeline, the Green Tank at Point Loma, “The 270” out to the west of Mission Bay, the upper end of La Jolla, the ridge outside of Del Mar and at hard bottom areas off South Carlsbad, Leucadia and Box Canyon.

Captain Joe Cacciola of Sea Star with Sea Star Sportfishing and the Oceanside Sea Center reports that they have started fishing kelp bed and shallow hard bottom areas where they have been catching a mix of calico bass, sand bass, whitefish and assorted rockfish. He says the kelp is sparse at Carlsbad but says that there is good kelp growth above Oceanside at the Barn Kelp. When fishing the areas of sparse kelp, they still do well when fishing the hard bottom and the few kelp stringers that are present.

Cacciola reports lots of bait in the Oceanside region and that they have been seeing lots of spots of breezing sardines. He also reports that some red crabs are being found locally as well. Anchovies are reported to be the best live bait when available with the smaller sized sardines, sardine chunks and strips of fresh frozen squid also working well.

The stretch of bad weather seems to have passed for the moment and it looks like the good spring surface fishing is poised to pick up where it left off before the rough weather arrived. Keep on fishing and I hope to see you out on the water sometime soon!

Bob Vanian is the voice, writer and researcher of the San Diego-based internet fish report service called 976-Bite which can be found at www.976bite.com. Vanian also provides anglers with a personal fish report service over the telephone at (619) 226-8218. He always welcomes your fish reports at that same phone number or at bob976bite@aol.com.