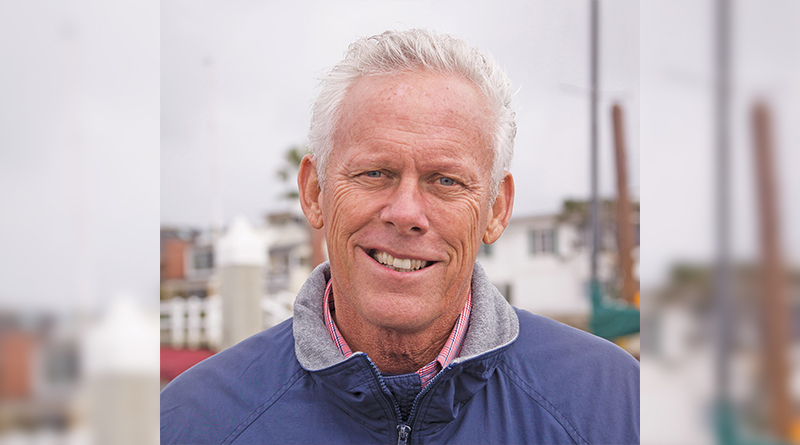 Former Harbor Commission Chair shares his background in boating and vision for the harbor.

“Brad will have a lot of new ground to cover and become familiar with in his role as a Council member,” Harbor Commission Chair Paul Blank said about his colleague. “He has great academic skills, and I expect he will quickly master all that is put before him.  Brad is very thoughtful and thorough in his deliberations. His head and his heart are both deeply committed to our city and community.”

Avery brings a lot of experience with the city and the harbor of Newport to his new role as City Councilmember. In addition to being a Harbor Commissioner and City Council member for Newport Beach, Avery serves as the director of Orange Coast College’s marine program and the president of the Catalina Island Conservancy Marineros Group. Not to mention, he is a member of the Board of Advocates for the Oasis Senior Center in Corona del Mar. He is also a staff Commodore for Newport Harbor Yacht Club and for Transpacific Yacht Club.

“Brad is a terrific addition our City Council. He will add particular strength and expertise in harbor related matters (in addition to Council member David Duffield) by bringing renewed focus and understanding on harbor issues,” Dixon stated. “The harbor is one of our city’s key economic drivers. We need to protect the quality of our waters and adequately allocate necessary resources to maintain Harbor infrastructure.”

Blank shares similar sentiments as the mayor about Avery being a part of the Newport Beach City Council.

“I am very pleased that Brad stepped forward from the Harbor Commission and now is stepping up to the City Council,” Blank said. “It will be great to have another strong advocate for the harbor on the Council alongside Council member Duffield. I’ve enjoyed working with Brad on the Harbor Commission.”

As a newly elected City Council member for Newport Beach, Avery in fact plans to preserve and protect the city’s natural resources which he acknowledges ultimately “improve the quality of life.” He is motivated to help with harbor initiatives such as water quality and dredging projects. The strategy to improve water involves keeping pollutants from entering the upper and lower bays. He also stressed the importance of facilitating dredging plans to ensure the harbor is deep enough for both homeowners and boaters.

The Newport Beach Harbor Commission has been working on various endeavors to benefit boaters and businesses along the harbor. Public docks allow for more access to the harbors and have been added to such locations as Marina Park and Cannery Restaurant. Avery would like to see more public and larger docks become available. He is also pushing for Newport Harbor to have more areas for people to launch small boats, kayaks and paddleboards.

A native Californian and resident of Newport Beach, Avery has lived on Lido Isle and the Balboa Peninsula. He currently resides in Newport Heights.

“Brad is a lifelong boater and fierce advocate for the harbor,” stated Mayor Dixon.

Avery’s parents had three different boats in the Newport Harbor when he was young. He began working at a young age skippering boats for people and teaching sailing in the harbor. Avery spent three years abroad spending winters in the Caribbean and summers in the Mediterranean. He did charter work on large private yachts.

“Whoever replaces Brad on the Commission will have some very well-seasoned sailing boots (or Topsiders) to fill,” stated Blank.

One thought on “Get To Know: Brad Avery – Newport Beach City Council member”