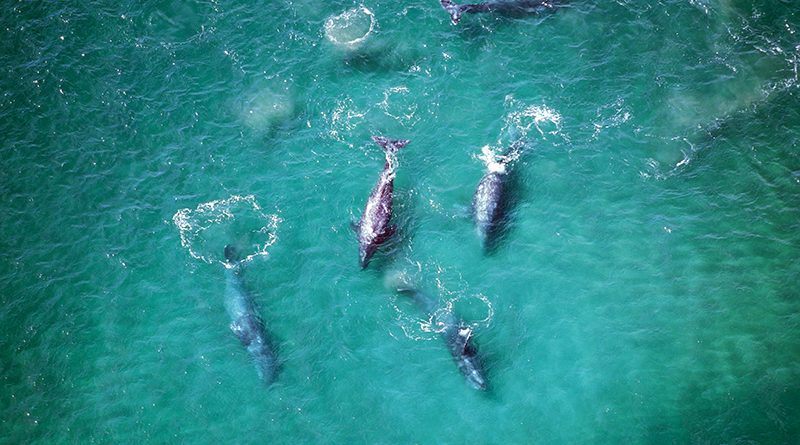 According to NOAA, The International Whaling Commission identifies entanglements as the main human-caused threat to large whales, estimating that worldwide 300,000 whales, dolphins, and porpoises die from entanglements each year. Shutterstock image.

A 28-foot gray whale was spotted entangled in a gillnet off the coast of Dana Point. It is assumed that the whale had been caught for quite some time after seeing how thin the animal had become.

DANA POINT— Early in the morning on June 15, a 28-foot juvenile gray whale was spotted entangled in a gillnet off the coast of Laguna Beach. The whale was monitored by a team of boats, allowing a better chance that the whale could be helped.

After a three-hour effort two miles off the Dana Point Harbor jetty, rescuers had successfully cut through the massive bundle of netting, and the whale swam free, heading north at 4 knots.

“The whale was originally reported on Monday morning off Redondo Beach, then resighted on Wednesday morning off Aliso Canyon by a Dana Wharf fishing boat,” said SeaWorld Public Relations Officer, Tracy Spahr in an email from June 27. “Multiple groups, including SeaTow, Newport Coastal Adventure, Captain Dave’s Dolphin Safari, and private boaters, had their eyes on the whale to assist the response team with resighting the whale.”

Two authorized rescue teams, Sea World San Diego and Pacific Marine Mammal Center (PMMC) out of Laguna Beach, led by Keith Yip, in coordination with NOAA, began the rescue by documenting the nature and type of entanglement. Once they understood how the whale was entangled, the SeaWorld San Diego Rescue Team, with assistance from PMMC, used multiple tactics to remove the netting in a safe way for the whale and the rescue team. The team made approximately 100 cuts to loosen the net and remove it, approx. 50-75 feet in length. The net was completely removed late afternoon on Wednesday, and the whale swam away.

“It was obvious the netting was on this whale for a while due to the net being embedded on the body, as well as traces of lobster track, fishing weights, and hooks stuck on the netting,” said Spahr.

Capt. Brian Woodley first spotted the whale slowly swimming off Aliso Beach at 10:18 a.m. aboard Sum Fun, a Dana Wharf Sportfishing and Whale Watching boat loaded with kids in a fishing summer camp. The whale had been previously spotted off Redondo Beach two days prior.

“I saw a little poof and thought it was weird that a gray whale was still here in June,” Woolley said in an interview with ABC 7. “Then, I remembered the email about being on the lookout for an entangled whale.”

Woolley alerted NOAA and kept his eyes on the whale until another Dana Wharf boat could take over. NOAA officials have made it clear to charter operators that when a whale in distress is spotted, those who can, should monitor the animal until rescue teams have arrived.

Around 1 p.m., Yip had arrived at Dana Point Harbor with a team from Pacific Marine Mammal Center and with Capt. Dave Anderson, who has experience untangling the massive mammals.

The whale was found about two miles off the coast. Yip and his team used a GoPro to gauge the whale’s condition from above and below the water. The whale was skinny, and the netting made it hard for it to swim.

According to Yip, a large net bundle was stuck just below the whale’s tail and had wrapped around the tail several times. The netting was made from a solid material called monofilament.

The rescue team first started using a serrated knife on a pole, which was unsuccessful in slicing the net. Yip then moved in closer with a 14-inch, sickle-shaped whale knife, which he has only resorted to its use a few times in his 30 years of rescuing marine mammals.

After 50 cuts, Yip said the net began loosening; he then switched to a smaller hand knife.

After all the lines were cut, by leaning directly into the whale, Yip said he gently dug out the remaining filaments lodged deep into the whale’s flesh with his fingers.

“The response efforts are crucial to documenting the types of entanglement and gear involved, and where possible, removal of the entangling material,” said Spahr. “Critical to the success of this effort was the quick report from Dana Wharf sportfishing and their willingness, along with multiple other whale watch and private vessels, to stand by with the whale.”