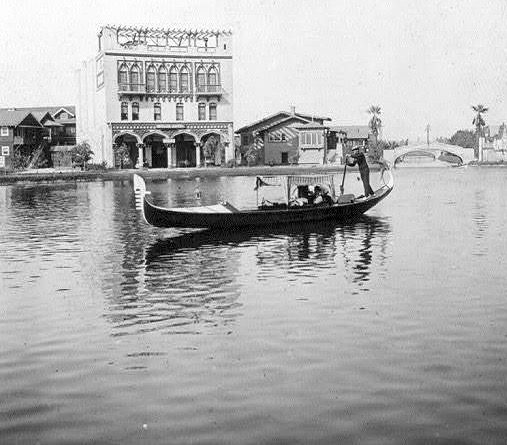 VENICE BEACH一 Venice of America was a series of canals that opened up in 1905 to bring the old-world charm of its namesake, Venice, Italy, to the West Coast of the United States.

It was a series of seven unique canals arranged in an irregular pattern that opened for tourists at Venice Beach, Calif. on July 4, 1905.

The canals collectively ran a total of two miles and were dredged from saltwater marshes.

The canals encircled four islands, including United States Island; the largest of the canals, Grand Canal, was originally a large saltwater lagoon.

Grand Canal, where this photo was taken, has since been filled in, paved over, and turned into Grand Boulevard.

Aside from the aesthetic that the canals provided the tourist spot, they had a dual purpose as main developer Abbot Kinney’s plan for transportation and development.

Venice was built on a walkable scale for pedestrian visitors and boasted the option of gondola rides and gondoliers to serenade tourists.

The canals were also open to residents for their boats and canoes.

After years of litigation, the project of filling up and paving over the canals began on July 1, 1929. There are still six canals left in Venice of America.