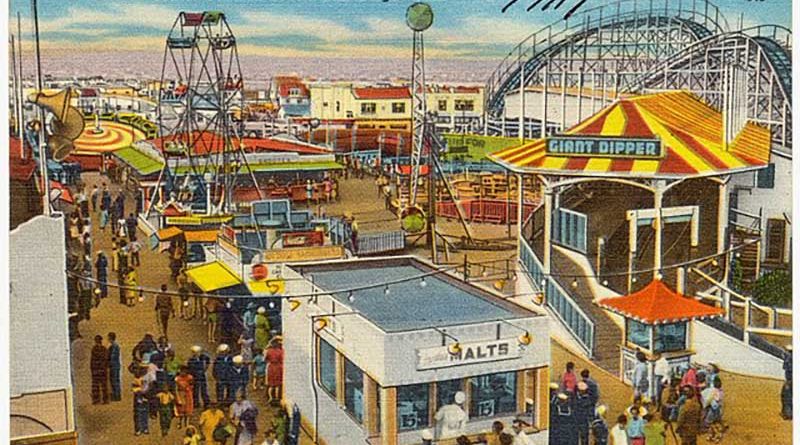 In 1925, sugar magnate John D. Spreckels built the Mission Beach Entertainment Center, now known as Belmont Park, as a way to promote his electric railway and stimulate real estate sales in Mission Beach. In 1925 the two main attractions of the park were the Giant Dipper Roller Coaster, a 2,600-foot-long coaster with two 18-seat passenger trains was built in less than two months, and The Natatorium, a salt-water pool later known as The Plunge swimming pool. Spreckels passed away a year after the park opened and granted the amusement park to the City of San Diego, according to the Belmont Park website. The center was a popular destination throughout the 30s and 40s, around the time this postcard was published, and in 1955 it was renamed, Belmont Park. In the late 60s, the park fell into disrepair and eventually closed in 1976. By 1988 the city allowed developers to turn the park into a commercial shopping center, and in 1990 after $2 million in repairs, the Giant Dipper was restored and became operational again. The coaster and the pool both remain in Belmont Park and are still operational.