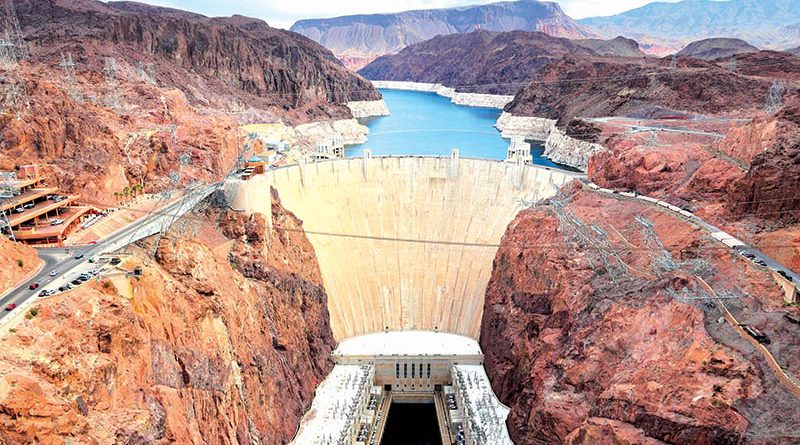 The U-shaped dam is visited by millions of travelers each year to marvel at the colossal concrete landmark that provides water and hydroelectric power to Nevada, Arizona, and California

In October of 1936, the United States Bureau of Reclamation arranged plans for a massive dam on the Arizona-Nevada border to calm the Colorado River, provide water, and harness hydroelectric power for the evolving Southwest.,The dam was also created to provide essential flood control, which would prevent damage to the farming communities downstream who suffered each year from the snow runoff from the Rocky Mountains.

According to History.com, the electricity produced by the Hoover Dam transmits lines spanning 266 miles through mountains and deserts, powering the lights, radios, and stoves of Los Angeles.Formerly known as the Boulder Dam, Hoover Dam began construction under President Herbert Hoover’s administration and was finished during the Roosevelt administration (which is when the name was changed to Hoover Dam).

In 1933, President Hoover was succeeded in the White House by Franklin Roosevelt and the new secretary of the interior, Harold Ickes. The latter was not a fan of Hoover and declared that the dam returned to its original name, the Boulder Dam. Americans blamed President Hoover for the Great Depression, tagging negative associations onto his name. As a result, the two names were used interchangeably, and the preference was often dependent upon the person’s political leanings.

In April 1947, President Harry Truman officially confirmed that the dam would carry on in Hoover’s name as the Hoover Dam.

When the construction of the dam was completed in 1935, it became the tallest dam in the world, standing at 726.4 feet, according to usbr.gov.

The electricity generated by the dam is a secondary perk of its purpose. The main principle for the dam was the collection, preservation, and distribution of water, the most valued commodity for the west.

Under the Federal Reclamation Bureau’s instructions, Hoover Dam had become one part of a much larger plan for a multipurpose water development project that tamed the Colorado River for the growing number of western farmers, ranchers, and city dwellers.

Before there was the Hoover Dam, water had once flowed freely to the ocean but is now seized by the 115-mile-long Lake Mead in Nevada.

The massive aqueducts of the Hoover Dam channel millions of gallons of Colorado River water to California, where it continues to flow from Los Angeles faucets and irrigates vast stretches of fertile cropland.

Hoover Dam generates on average about 4 billion kilowatt-hours of hydroelectric power each year for use in Nevada, Arizona, and California, according to the Bureau of Reclamation; that is enough power to serve 1.3 million people.

By using the Hoover Dam, the federal government made an endeavor to demonstrate that the arid climates of any region once called the Great American Desert, a term used to describe the Great Plains west of the Rocky Mountains, was no serious obstacle for the development and settlement.

Nevertheless, while fast-growing cities across the west, such as Los Angeles, Las Vegas, and Phoenix, face increasing difficulties in accessing the water they need, it remains to be seen if the Great American Desert might still control its restrictions for western growth.