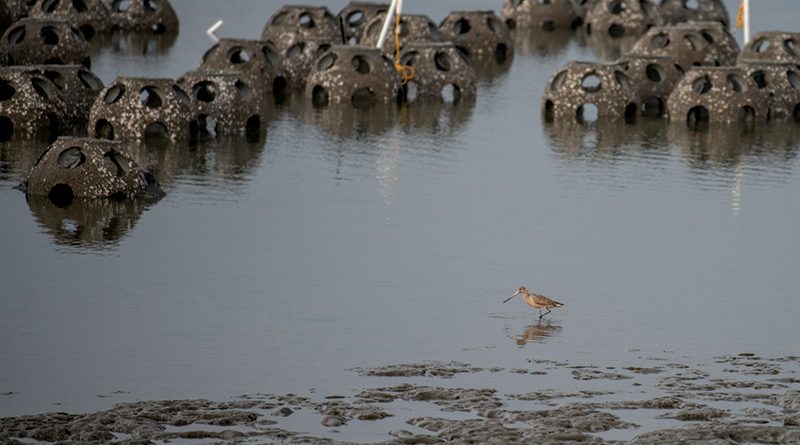 These reef balls may seem dry and brittle, but to environmentalists, the pacific oyster shells are a source of life that they hope will bring many benefits to the bay. Port of San Diego image.

To clean the water and preserve the wetlands, the San Diego Bay is part of a significant preservation effort years in the making. Pacific oyster shells from the Carlsbad Aquafarm will be crushed up and used as a life source to benefit the bay.

SAN DIEGO— On Dec. 9, the Port of San Diego sent out a press release announcing the release of more than 300 “reef balls’ into the San Diego Bay to help protect South Bay from rising sea levels.

The Port of San Diego, in partnership with the California State Coastal Conservancy and U.S. Fish & Wildlife Service, has begun the launch of the South Bay Native Oyster Living Shoreline Project adjacent to the Chula Vista Wildlife Refuge by installing “reef balls.” The project has been years in the making and is the latest of several Port projects to protect the shoreline from impacts related to rising sea levels and increase San Diego Bay’s biodiversity by creating new marine habitats.

The project costs approximately $960,000 and is fully funded via grants from the U.S. Fish and Wildlife Service and Builders Initiative. The cost covers the project’s fabrication, installation, and long-term monitoring.

The objective of the project is to demonstrate the ability to attract and establish native oyster populations that create structurally complex “reef” habitats for fish, birds, invertebrates, and aquatic plants. The project is also expected to improve local water quality via oyster water filtration and settling of sediments and increase wetland connectivity to intertidal and subtidal lands.

The oyster shells came from the Carlsbad Aquafarm, a market for sustainably farmed seafood, and now the oysters being brought to the San Diego Bay will serve a whole new purpose.

“The Port of San Diego is proactively and continuously planning for and implementing various strategies to reduce the impacts of future sea level rise,” said Chairman Michael Zucchet, Port of San Diego Board of Port Commissioners in the press release. “We are grateful to the U.S. Fish and Wildlife Service, California State Coastal Conservancy and Builders Initiative for their support of this important project that will strengthen coastal resiliency along our waterfront while also helping to protect and enhance the diverse ecosystems in and around San Diego Bay.”

The State of California continues to invest in the health and resilience of its shorelines to protect its communities and economies. These efforts also benefit the biodiversity of coastal habitats in California According to Amy Hutzel, Executive Officer, California State Coastal Conservancy, the South Bay Native Oyster Living Shoreline Project demonstrates the potential of nature-based solutions to help waterfronts keep up with the rising sea levels.

“The Carlsbad Fish and Wildlife Office’s Coastal Program is excited to be partnering with the Port of San Diego and California State Coastal Conservancy to protect and enhance San Diego Bay’s shoreline, which is critical to wildlife and the coastal community,” said Scott Sobiech, Carlsbad Fish and Wildlife Office Field Supervisor in the press release. “National Coastal Wetlands Conservation grants issued by the U.S. Fish and Wildlife Service’s Sport Fish Restoration Fund are made available through recreational fishing taxes, so we in turn want to thank our angling and boating partners for their contributions to wetlands conservation.”

Living shorelines lean on natural elements, such as plants and in this case, oysters, to stabilize shorelines in place of the traditional hard armoring, such as rip rap revetment and sea walls that we currently see prevalent around the bay. Living shorelines are a prime resiliency strategy regardless of rising sea-levels due to their ability to naturally adapt and grow over time.

Each reef array is roughly 88 feet long by 45 feet wide to accommodate the 15 reef groups with 14-20 feet of spacing between each reef group. While the total area of the project spans approximately 29,700 sq ft (0.68 acres) of intertidal shoreline, the entire “footprint” of the reef ball elements would be substantially lower at 5,760 sq ft (0.13 acre).

The project results from over five years of collaboration across a project team representing state and federal agencies, academia, regional government, and the non-profit sector, including Environmental Science Associates. They were involved in the design process. If successful, the reef will be permanent. In addition, project partners share an interest in addressing shoreline protection, fishery populations, health, and climate change in San Diego Bay through scientifically supported alternatives to standard shoreline protection.