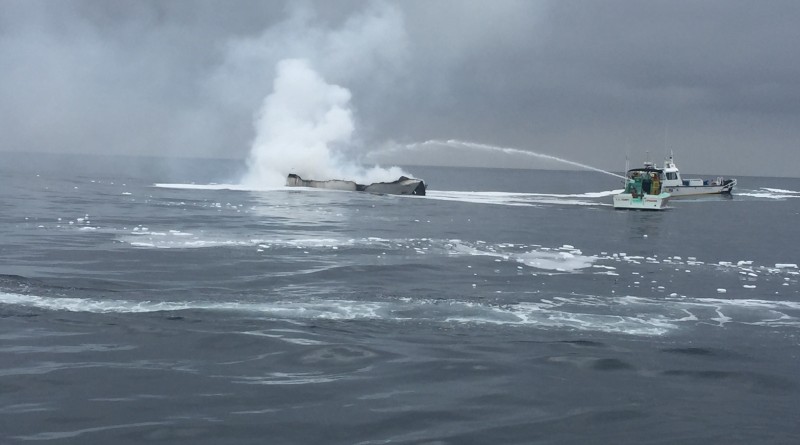 A boat was on fire just off the Malibu coast on May 17. Another boater happened to be nearby and helped with the rescue efforts.Capt. Tom Petersen photo

You’re on the ocean or navigating through a harbor and you see something happening in the water. What do you do?

SOUTHERN CALIFORNIA — Two boaters and a dog were rescued out of the water on May 17 after a vessel they were aboard caught on fire. News reports indicated flames broke out aboard a 45-foot vessel near Malibu’s Zuma Beach. No one suffered injuries thanks to the help of another boater navigating nearby and the quick response of the U.S. Coast Guard.

How should you react and respond to a distress or emergency situation? While there are no specific rules of how to be a Good Samaritan there are certainly many protocols and recommendations to keep in mind whenever you come across an open-water emergency (and whether or not help is on the way or has already arrived).

San Diego Harbor Police Officer James Dreher said life should always be the first priority whenever a boater comes across a distressed vessel while on the open water.

“If a public boater ‘Good Samaritan’ comes across vessel in distress for any reason the first thing to always remember is that life comes first, property second,” Dreher said. “Ensure the safety of people aboard the distressed vessel and immediately call for assistance (911, marine radio, signals, etc.). Within that process, one should know their limitations so they do not put themselves or their crew in peril.”

Also pay attention to your surroundings. Is the vessel taking on too much water and sinking too fast? Are there explosives nearby? Do you smell toxic fumes?

“Be aware of your surroundings and be cautious of dangers aboard vessels such as tanks that could explode, rapidly sinking vessels, toxic fumes/smoke, lines or debris in the water that could fowl your props putting your vessel out of service, etc.,” Dreher said.

Another major issue is wake. Dreher said boaters responding to an emergency situation could actually cause more problems by not controlling their wake.

“If you are approaching an emergency situation whether law enforcement, U.S. Coast Guard or any agency is there already or not, please be aware of your vessels wakes and do what you can to slow other vessels in the area as well. There have been numerous times where unnecessary injuries or damage have occurred due to someone not paying attention to their wake,” Dreher said. “When emergency crews are focused on the job at hand they are not always paying attention to the incoming large wakes that could injure them or the people they are attempting to help.”

Capt. Tom Petersen was aboard Valkyrie when he came across a boat on fire near Malibu on May 17. He headed toward the vessel just after he heard a May Day over the radio. He was navigating from the Channel Islands area to Newport Beach to have his boat hauled out for some work.

Petersen intended to leave for Newport Beach a few days earlier but did not make it out onto the water until May 17.

“After hearing the Coast Guard May Day I realized that I was about 3 or 4 miles away and probably the closest boat. As I turned around I could seem a plume of black smoke and headed toward it,” Petersen said. “I did get concerned when the people in the boat stopped talking to the Coast Guard, but once I got about 1.5 miles away I could see why. The boat was fully engulfed and there was nothing left.”

Petersen added he feared the worst as he approached the burning vessel.

“I did have a concern in my gut as to what I would find – floating bodies or swimming passengers, the difference between a recovery and a rescue,” Petersen said. “Upon approach I could see about 110 yards from the boat three bobbing heads (two people and a dog) and within a few seconds they all moved!”

It was evident the distressed boaters were prepared and knew how to respond to the emergency in front of them, Petersen said.

“The moment they smelled smoke and identified a fire aboard they contacted Coast Guard, donned life jackets and emersion suits! Even the dog had a life jacket! These were well-prepared and also professional captain and commercial divers,” Petersen said. “They had the right equipment, donned gear right away, contacted help and egressed when they had to.”

Valkyrie’s captain helped the boaters out until the Coast Guard arrived. He described what happened in an email he sent to The Log on May 20.

“I dropped the platform to bring them aboard. Not long after the Coast Guard arrived, one of the EMT’s boarded Valkyrie to check them out. Other than cold and wet, all were ok,” Petersen wrote in his email. “The whole thing lasted about an hour or so and by the end there were five lifeguard jet skis, two Coast Guard boats and two fireboats. The boat ended up burnt to the waterline and after putting the fire out, it sank below the surface.”

How to be Prepared

There are several ways to be prepared on the water – regardless of what side of an emergency you might find yourself.

Many states, including California, are either requiring or recommending all boaters take boating safety courses. A boater education course offered through boat-ed.com, for example, teaches California boaters how to respond to boating emergencies.

The rescue techniques section of the coursework teaches boaters how to “reach, throw, row or go.” Methods to rescue someone who is overboard include reaching out with your arm, throwing a life-saving device, row your boat right up to the person, or allow your powerboat (with the engine off) to wade toward the man or woman overboard.

A boater should use one of the four techniques above (reach, throw, row, go) to get the victim out of the water as soon a possible. The victim should be removed from the water “gently and in a horizontal position,” according to the Boat-Ed recommendation.

Once out of the water the rescuer should, according to Boat-Ed, prevent further heat loss, treat the hypothermia as best as possible through basic life support, and, ultimately, seek immediate medical help.

Discover Boating offers 10 steps to being a safe navigator on the water. Steps include submitting a float plan to a trusted contact, making use of life jackets or personal flotation devices, learning/knowing how to swim, and undergoing a free vessel check to ensure your boat is in working order.

Capt. Petersen provided The Log with his suggestions of how a Good Samaritan could be helpful in emergency or distress situations.