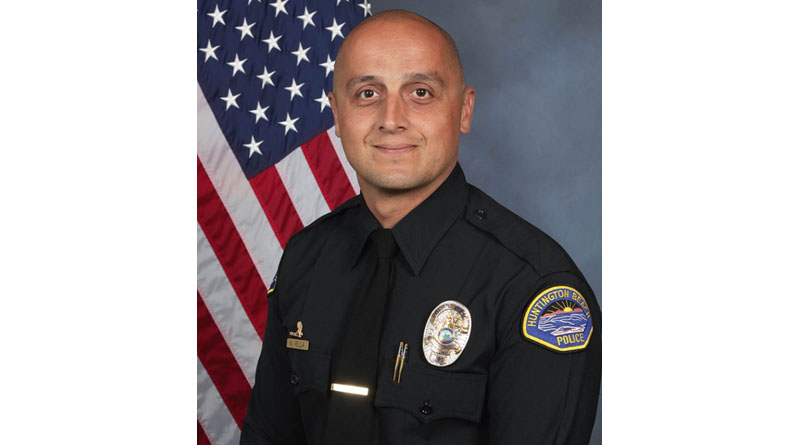 A Huntington Beach police helicopter “crash-landed” in the water in Newport Beach on the evening of Feb. 20, and a rescue operation was launched, said, officials. One pilot died, and another was injured.

HUNTINGTON BEACH— On Feb. 20, at approximately 6:30 p.m., Huntington Beach Police Department helicopter, HB-1, crashed into the water off Newport Beach with two officers aboard the aircraft. Officer Nicholas Vella, 44, was rushed to the trauma center, where he was pronounced dead after succumbing to injuries. The other officer whose name has not been released was injured in the crash and is in stable condition.

The helicopter was en route to assist in what is known as a “disturbance fight call” from Newport Beach, which contracts for aerial services as needed from HBPD.

HB-1 responded to a priority call for a fight in progress near 18th Street and Balboa Boulevard at approximately 6:25 p.m.; the crash occurred near the shore in an area between the Lido and Balboa peninsulas shortly after responding to the call.

Multiple civilians and public safety personnel jumped into the water to rescue the officers. Both officers were pulled from the helicopter and transported to nearby hospitals.

The second officer involved in the crash was released from the hospital on Feb. 20 and has been identified as the pilot. An investigation on the exact cause of the crash is currently underway by the National Transportation Safety Board, the Federal Aviation Administration, and the Orange County Sheriff’s Department, Major Accident Reconstruction Team. However, on Feb. 22, police department spokeswoman Jennifer Carey said that it could be up to a year before the cause could be known for sure.

There is no immediate information on what may have caused the crash, which happened during calm wind conditions and dry weather.

“We need to have the current aircraft inspected to make sure there’s nothing wrong…we’re going to pull those in — they won’t fly until we do the inspection,” said Parra in a statement.

Officer Vella is a 14-year Huntington Beach Police Department veteran and leaves behind his wife and daughter.

“There are no words that can express this loss adequately,” said Parra in a statement. “We are deeply grieving for Officer Vella’s family, and as a police department, we grieve as well.”

“Anytime a policing agency loses one of its own, it’s like a loss of a family member,” said Don Barnes, Orange County Sheriff. “I’ve had several losses throughout my career, and oftentimes organizations never fully recover from a loss.”

Orange County Sheriff’s Department Sgt. Ryan Anderson said that agency assisted by deploying resources to help with the rescue. The Newport Beach Fire Department and the Orange County Fire Authority were among the agencies on the scene as well.

Larry Sato spoke with NBC Los Angeles about witnessing the event while his party was waiting to be seated for dinner when the crash occurred.

“We were waiting for a table at The Crab Cooker (restaurant), and we saw the helicopter circle around a couple times, and they kept getting lower and then suddenly we saw the lights just twirling. It went behind the building, and we never saw the impact,” Sato said according to NBC Los Angeles. “It was frightening.”

“It is with tremendous sorrow that we announce the passing of Officer Nicholas Vella, a 14-year veteran of HBPD…” said an Instagram post put out by @hbpolicedept, the HBPD.

On Feb. 22 at 1 p.m., the Huntington Beach Police Department held a procession for Officer Vella. The procession began at the Orange County Coroner’s office and ended at Community Funeral Service in La Habra.

For more information on what to do in a helicopter when executing a crash landing, please reference Chapter 11 of the Helicopter Flying Handbook.