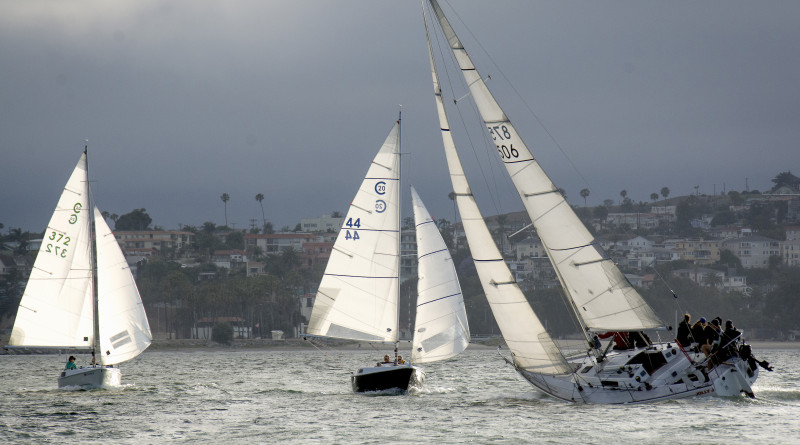 SAN PEDRO —Sailors are used to practicing patience on the water as they wait. Sometimes seconds, minutes or hours for that perfect wind gust.

Mariners, windsurfers and paddleboarders who don’t like guessing games head to Cabrillo Beach at specific hours of the season to catch some wind. The location, known by locals as Hurricane Gulch, never disappoints with its consistent weather conditions.

It’s local knowledge that the area known as Hurricane Gulch is situated around Point Fermin on the Palos Verdes Peninsula – which includes Cabrillo Beach – is perfect for wind activities.

The Gulch’s wind phenomenon, according to Ryan Kittell, forecaster and Marine Program Manager for the National Oceanic and Atmospheric Administration’s (NOAA) National Weather Service, Los Angeles Oxnard, is created when air over the valleys warms and rises and mixes with air drawn in from cooler coastal areas.

“This situation creates a westerly (west to east) wind along the Southern California coast each afternoon and evening when the valleys are warmest. As this air moves over the ocean toward the land, it encounters the Palos Verdes Peninsula and Catalina Island. Rather than go over these fairly high barriers against gravity, the air squeezes through the San Pedro Channel (the area of water between Catalina and Palos Verdes),” explained Kittell, “because of the Bernoulli Effect, the air must speed up through the narrow channel. This typically enhances the winds by 5 or 10 mph through the San Pedro Channel which includes Hurricane Gulch at the mouth of the Channel.”

Los Angeles and Cabrillo Beach yacht clubs take advantage of the forceful winds, whether it’s ending a cruise in the Gulch or hosting races and training in the waterway.

Willie Bell, Los Angeles YC vice commodore, remembers family trips to and from Catalina Island made that much more exciting by a few minutes sail in the Gulch aboard the family’s boat, Westward.

“One of our favorite experiences as a family was leaving the island Sunday afternoon and the anticipation of coming round the lighthouse,” said Bell, who recalls leaving from the yacht club’s original location on Fish Harbor those summer days (Los Angeles YC moved from Fish Harbor to Cabrillo Beach in 1994).

“When you hit Hurricane Gulch that’s when the fun starts,” he said.

Bell’s father, who spent the majority of the trip “checking things out below” (code for taking a nap), would take the helm just as they neared the lighthouse to sail the boat home. Bell and his siblings would close the port holes and hatches in preparation for the fast ride through the Gulch.

“So we round the lighthouse and crack the sails in and low and behold the fun starts,” Bell recalled. “The boat tips; the rails in the water and spray is flying and you’re moving rapidly into Fish Harbor. Ten-15 minutes later you get into the lee of the Federal Prison and that’s when your weekend is over. The boat straightens up, the wind quits and it’s time to take down the sails and start cleaning up the boat.”

These days Bell takes his adult children on the same 19-mile trip from Los Angeles YC at Cabrillo Beach to Howlands Landing.

The weather conditions in the Gulch also make for fast races.

If a significant regatta is coming up and the weather is right. Marie Rogers, Los Angeles YC 2016 fleet captain and Community Sailing Coordinator, will take a day off, grab her husband, and join the race.

“I love racing in the Gulch,” Rodgers who races with husband, Bill Rodgers on their boat, Marie, and local races on her J29, Rush Street, said.

Bell explained the site is ideal for kit boarding, windsurfing and dinghy races thanks to good winds and little to no swell. However, he reminds sailors to be mindful of their surroundings.

“You have to have respect for the wind,” he said.

Overall sailing and recreating in Hurricane Gulch does not appear to be dangerous as long as you know what you’re doing.

Cabrillo Beach YC Commodore Bill Schopp noted knowledge of the wind pattern can be helpful when planning times to head to the Gulch.

“You have to think about what direction the wind is coming – and the wind usually shifts 5-10 degrees over a certain period of time,” he said. “It used to be the right side was favored but now it’s not always favored so it’s more challenging.”

The most common reason for rescues are due to vessels running out of power or inexperienced mariners, according to Los Angeles’s Department of Recreation and Parks, Cabrillo Beach Lifeguard Service.

“Mariners that are transiting through Hurricane Gulch should be prepared to have strong winds and choppy seas disrupt their course. They should always use the wind to their advantage, such as heading into the wind or tacking properly. Don’t underestimate the power of Mother Nature,” Rogelio Fernandez, Cabrillo Beach Lifeguard Lt. II, wrote in an email to The Log.

During the summer months, the Westerly winds return and produce gusts of winds that can reach up to 22-33 knots (Small Craft Advisory),” he said. “Hence the name ‘Hurricane Gulch,.”

Rogers has witnessed lifeguards assisting kayakers unable to make it back to shore due to the winds. Racers, boaters and those who recreate in the area appear to be clued in to weather patterns.

Fernandez added, “If they run into problems, make sure to have all passengers and crew members put on their life jackets, have an anchor and line readily available to deploy, and contact the United States Coast Guard-Sector Los Angeles for help on VHF Ch. 16. Chances are that my lifeguards will already see you in distress from the lifeguard towers and we’ll respond with our lifeguard boat to your aid.”

According to Fernandez, Inner Cabrillo Beach is known as a great place to learn how to windsurf, due to the protective breakwater and a Non-Motorized Vessel Area designed to keep motorized vessels from colliding with windsurfers.

“These beginners should learn how to sail early in the morning, before the strong westerly winds arrive around 11 a.m. That holds true for patrons wanting to get their work out on a paddleboard, SUP, or a kayak. But we also rescue many powerboats and sailboats that either have mechanical problems or inexperienced operators.”

Prior to joining Los Angeles YC, Rogers had heard about the strong winds in San Pedro and wasn’t sure what to expect when she first sailed her own boat in the Gulch.

“It was terrifying,” she recalled, “but I got over it and it was fine.”

The quick wind pick up mixed with the high traffic area of the main channel shook her up a bit, but only inspired her to learn how to predict weather patterns and learn to sail.

After learning how to sail through the Marina Sailing program, Rogers helped to launch the Los Angeles YC Sailing Program with Janette Borgen and Bill Rodgers. The community program focused on teaching women interested in getting into the sport, later expanding to junior class offerings.

In those classes, students are taught how to sail in Hurricane Gulch and how to predict weather changes – a must when sailing in the area.

“The weather could be nice and calm but completely switch from 0-15 knots and it’s scary,” said Rogers, a certified sailing instructor who holds a Coast Guard 50 gross ton Masters License.

The club also hosts clinics on the weekends a couple of times a month. Fleet includes Capri 22s, Cal 25, Merit 25 and a keel boat. Visit layc.org for more information.

Cabrillo YC also has a Junior Sailing Program using a fleet of Optis and Sail Cubes (training watercraft) to allow kids to sail in 20 plus knots of wind. Several kids come from yacht clubs outside of the local area to train to sail in the harsh winds at Cabrillo Beach YC, Schopp said.

According to Schopp the Los Angeles Olympic Committee (LA 2024) is strongly recommending The Los Angeles Waterfront as one of five sailing venues for the 2024 Summer Games. Hurricane Gulch is included in the list of potential racing sites.

“The harbor will serve as an excellent venue for events that require calm waters as well those that require a nexus to the open ocean,” according to the LA 2024’s “Vision, Games Concept and Strategy.”