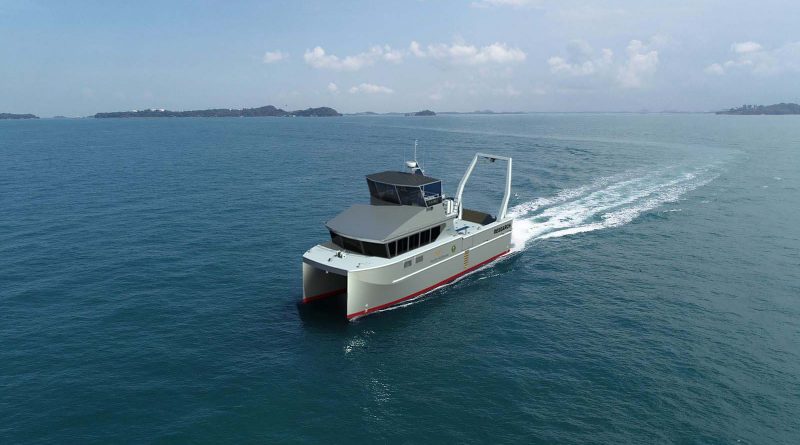 According to the DOE, the new plug-in hybrid research vessel will be the first of its kind in the agency’s fleet. Image courtesy of Incat Crowther

The Department of Energy anticipates its first hybrid-electric research vessel.

The new R/V Resilience, a hybrid-electric research vessel, is expected to join the Pacific Northwest National Laboratory-Sequim (PNNL) fleet in April 2023. The vessel is being built by Seattle-based contractor Snow & Company, and Incat Crowther, located in Sydney, Australia, with offices in New Orleans, is a design partner.

The PNNL is a U.S. Department of Energy (DOE) national laboratory managed by the department’s Office of Science. The laboratory is home to several scientific user facilities and research facilities.

The R/V Resilience was created because the PNNL currently has a fleet of two boats and wanted to expand by adding a larger vessel with more capabilities.

The hybrid-electric propulsion system, a major R/V Resilience design feature, is being provided by Pacific Power Group from Kent, Washington. According to the DOE, the new plug-in hybrid research vessel will be the first of its kind in the agency’s fleet.

Federal officials said in a statement that the R/V Resilience represents “the next generation of blue economy technology and will enable future research and testing to support renewable power from the ocean. As a hybrid vessel, the investment will advance long-term opportunities for energy innovation and decarbonization of marine transportation.”

A unique structural feature of the Resilience is the all-aluminum construction catamaran hull. In addition to possible efficiency improvements, the multi-hull layout provides a bigger beam that translates to a science-accommodating working deck complete with a knuckle crane on an A-frame.

“A catamaran is efficient because the hulls have less wetted surface area for a given displacement, in addition to the benefit of two slender hulls having a superior length-to-beam ratio than a single, wider hull,” said Stewart Marler, marketing manager for Incat Crowther. “There’s an additional functional benefit for working platforms in that a greater beam can be achieved in a smaller vessel, creating more work space without the cost and weight of a larger vessel.”

The two hulls are also anticipated to have increased stability versus a mono-hull which is vital for an array of scientific processes like acoustic surveys.

In an interview with Pacific Maritime, Snow & Company Project Manager and Estimator Chris Watson said, “They are doing some energy stuff, wave power generation research. They also do marine environmental surveys, fisheries, etc. This thing is multi-capable for them. It is a pickup truck. They can load whatever they want to and back in this thing.”

In addition, according to Snow & Company Vice President of Business Development Tim Kolb, when bidding for the project, the multi-hull design was part of the request from the DOE. Additionally, Kolb said that a catamaran has the proper hull for this type of research boat.

Onboard design features include:

The excitement of hybrid

“They [Pacific Power Group] are what we would call the propulsion integrator,” said Kolb to Fishermen’s News. “They are the ones integrating all the electronic propulsion. The electric motors, the batteries, their diesel engines. They are providing all that to us.”

According to the national laboratory, the onboard Spear Trident 113 kWh battery bank can be charged by its engines or shore power.

The R/V Resilience is designed to be able to cruise at 20 knots using diesel power while also being able to operate in an all-electric mode at sub-six-knot speeds. The goal for the lab is while working in a battery-electric mode, the vessel would be almost silent and emissions-free. In addition, the R/V Resilience should be less invasive when studying fish and other wildlife while also reducing pollution.

According to Watson, when there is acoustical work, they are not putting sound in the water, affecting whatever instrumentation they are trailing behind. So as a result, the vessel will be completely silent.

Vibration caused by running engines can also upset sensitive scientific equipment. So, when departing from the dock, the crew will most likely be powering up with the vessel’s diesel engines. Once they arrive at their work site, they will work on electric power.