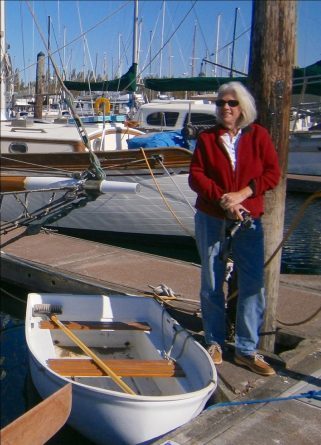 Susan Jewitt Colby, a long-time editor, photojournalist, and contributor to boating publications and websites world-wide, passed away Sunday March 20 at the age of 73 in her beloved home country, South Africa. Colby had previously resided and worked throughout the US West Coast, including San Diego, Costa Mesa, the Bay Area, and the Pacific Northwest.

Colby turned her passion for adventure into a career including editor of The Log Newspaper from 1995 to 1997, Dockside and Harbors Magazine, and senior editor at Ecology.com network.  Notably, Colby was the lead content producer on one of the first tech startups, Quokka Sports, to cover sports on the web. This led her to direct the creation of the first virtual and total immersion yacht race, the 1997-98 Whitbread Round the World Race.  Also, a skilled photographer, Colby’s photos often graced the covers of leading sailing and cruising magazines.

Susan’s love of the sea started young when she hopped aboard a sailing yacht in her late teens and ventured around the world with the wind at her back. After that she never stopped exploring, conquering, and enjoying life.

“I had just arrived on Raiatea aboard Vadura, the 90′ ketch I sailed on from New Guinea,” said Susan while reflecting back on time at 19 years old. “I was celebrating and dancing in the copra shed on the old dock and the crew tried to teach me to tāmūrē! We left the following day for Papeete where we stayed at Marlon Brando’s house for a couple of weeks, and then I went back to Raiatea to sail Seedrache to Hawaii, then on to San Francisco and beyond.”

Nearly five decades later, she returned to the warm breezes of Tahiti on a charter.  After a swimming expedition with sharks and rays, Susan jumped up and began dancing the tāmūrē when an old Te pāpā ‘u (grandpa) began strumming his ukulele. Indeed, Susan was known for her joie de vivre, sense of adventure, and self-proclaimed ‘inappropriate’ life.

When faced with her most recent challenge, a cancer diagnosis, she braved it head-on with her customary courage, positivity, and strength. But in the end, this was one challenge she couldn’t overcome.

Susan is survived by her sons, Ryan and Cody, her beloved “boys” (grandsons) Oliver and Everett, and a multitude of friends and loved ones who will miss the light and laughter she brought to this world.

A gathering to celebrate her life will be held in mid-July in Dana Point, Calif.

One thought on “In Memoriam: Susan Jewitt Colby”