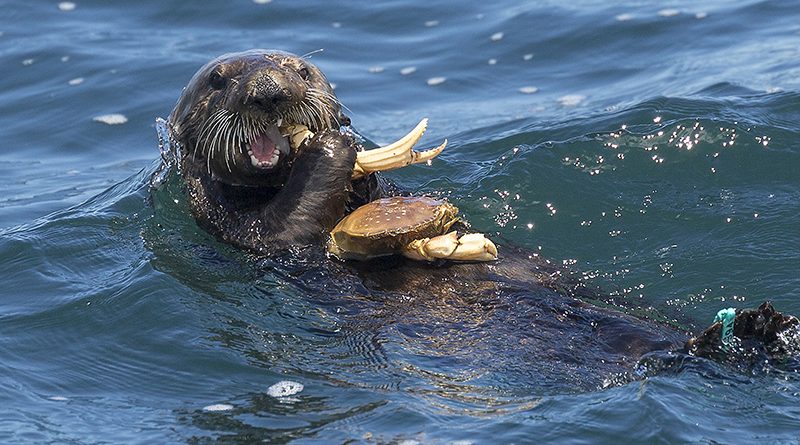 Sea otters are considered a keystone predator in kelp forests which helps control the shellfish population and can protect kelp forests. Shutterstock image.

The sea otter is considered a keystone predator, which has important effects on nearshore marine communities.

A feasibility report released this summer shows positive signs for the future possibility of the reintroduction of southern sea otters to parts of their former habitats in California. While the report from the U.S. Fish and Wildlife Service is not a recommendation to reintroduce the species or a proposal for reintroduction, it does assess the effects of sea otter reintroduction and studies known information.

Sea otters lived throughout the north Pacific Rim, spanning from Japan down to Baja California. They became a targeted species for the fur trade in the 1700s, and by 1911 the species was almost extinct, with the population remaining in a few small pockets. The study is a companion to a study released by an Oregon nonprofit, Elakha Alliance, which released a study in Aug. 2021 for the reintroduction of otters in Oregon. The study released this summer fills in for the feasibility of reintroducing the species in the area between northern California from around San Francisco Bay into Oregon.

In 2021 Congress directed the USFWS to conduct a feasibility study for reintroducing sea otters to the West Coast. The mandate zeroes in on the otter’s “critical ecological role in the marine environment as a keystone species that significantly affects the structure and function of the surrounding ecosystem.”

Sea otters have been the subject of reintroductions in the past, and the study states that roughly one-third of the world’s sea otters are the result of successful reintroduction efforts in the past in parts of Alaska, British Columbia, Washington, and Oregon.

In the study, the USFWS found that the reintroduction to otters in northern California and Oregon is feasible but “would require work to overcome some challenges particularly in the socioeconomic sector.”

Otters rely on shellfish, clams, sea urchins, and other bottom-dwelling creates as part of their food source, and reintroduction could create competition for shellfish and could have a negative impact on the shellfish industry. The study suggests finding ways to mitigate the economic effect and even suggests that the benefits from ecotourism could mitigate the issue, but there would need to be a socioeconomic impact assessment to accurately gauge the potential fallout.

However, the study found that the restoration of the species would not only improve the threatened status of the southern sea otter but also help restore ecosystem function through their status as a keystone predator by controlling the population of species like sea urchins, which eat kelp

“Sea otters are a keystone species, meaning they have important effects on the nearshore marine community,” said Lilian Carswell, southern sea otter recovery and marine conservation coordinator for the U.S. Fish and Wildlife Service, in an Aug. 9 email. “By boosting the abundance of kelp and seagrass, sea otters provide food and shelter for hundreds of other species and help fight climate change. In the assessment, we determine that reintroducing sea otters to parts of their former range could help restore nearshore ecosystems, increase gene flow between sea otter populations, benefit the threatened southern sea otter, and provide overall economic gains to coastal communities. The assessment isn’t a reintroduction proposal though. As we go forward, we’ll be working with scientists and a broad range of stakeholders to make sure any actions we’re considering are fully vetted and that we’re taking into account input from everyone who might be affected.”

While the USFWS found that reintroducing the species is feasible, several steps lie ahead before the fluffy mammals can be reintroduced.

“The assessment recommends convening a series of structured decision-making workshops to explore reintroduction options,” said Ashley McConnell, public affairs supervisor from the Ventura Fish and Wildlife Office for the U.S. Fish and Wildlife Service, in an email. “These options would include identifying potential reintroduction sites, initiating a rigorous socioeconomic impact study to look at potential negative and positive impacts, developing plans for pilot studies to resolve key uncertainties in reintroduction methods, and integrating the Oregon and California population models.”

If they move forward, the USFWS would need to initiate a National Environmental Policy Act review process which would include a public review and other stakeholder consultation before any formal decisions are made.

One thought on “It Could be A Cuddle Party: Feasibility report for reintroduction of southern sea otters looks positive”