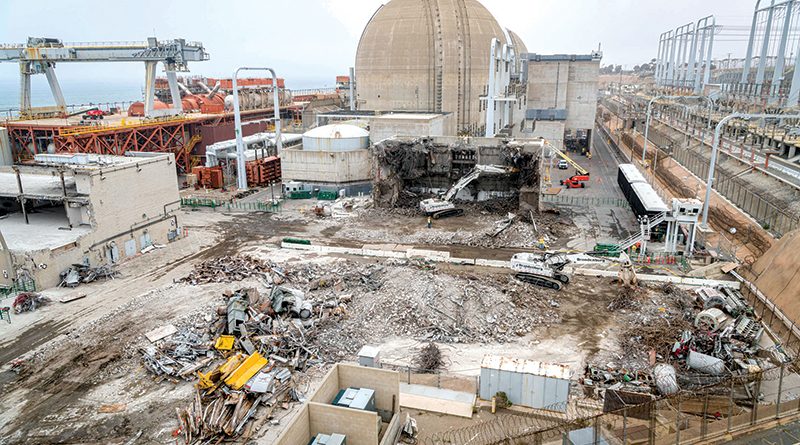 The San Onofre Nuclear Generating Station hasn’t produced electricity for more than nine years now and is in the beginning stages of demolition. However, there are obstacles slowing down the already time-heavy project.

SAN DIEGO— The San Onofre Nuclear Generating Station, also known as SONGS, was shut down in January 2012, and the process of its dismantling began in January 2020, but the plant still seems to be a blemish on Interstate-5. The power plant, which hasn’t produced electricity in nine years, is being demolished, and the 84-acre site offers a peek into what’s involved in decimating an operation of such hefty size.

The decommissioning of SONGS is expected to take roughly eight years to complete and cost about $4.5 billion.

“We won’t be finished until this project runs to 2029, so we’re really just closing out the second year of the dismantlement phase,” said John Dobken, the Public Information Officer/Media Relations Manager at the San Onofre Nuclear Generating Station.

Just over one billion pounds of equipment, components, rebar, concrete, steel, and titanium will be removed from the site upon completion, and about 80 percent is considered radioactive. Nearly 60 million pounds have been shipped out so far, and ultimately one billion pounds will go out by the time the project is completed.

After Southern California Edison was granted the required permit in October 2019 from the California Coastal Commission, which cleared the way for dismantlement, initial work began in early 2020. Still, the pace of activity has picked up since then, and so far, 26 of 62 structures have been demolished.

In early December of 2020, Edison mailed 30-day notices of crucial timelines to 12,000 residents in communities within a five-mile radius of the plant. The process has included the removal of buildings, containment domes, and other above-ground structures associated with both reactors. Large pipes that once took in and discharged ocean cooling water will also be included in the removal of the plant, along with buoys and anchors.

“Some of the initial structures that we took down were seismically robust structures, you know, reinforced concrete and steel,” said Dobken. “Some of them were more office buildings and warehouses and things like that, but really what we needed to do was clear a lot of those buildings out first because we don’t have a lot of space on site. So, we needed to create room because when we get to the buildings with a lot of concrete, we crush that concrete down on-site and then load it into rail cars so, by clearing out a lot of those buildings first, we created a lot of open space. So, now we can really start on moving into the interior of the site, but those buildings are going to take a lot longer. Obviously, the structure, it’s a large steel and concrete structure that is going to take a couple of years and then, of course, the containment domes; when we start on those, it’s going to take some time.”

By means of an executive order signed by former Gov. Gray Davis, all the debris from any decommissioned nuclear power plant in California must be shipped out of the state. Most of the plant’s debris are labeled Class A waste, the lowest level of radioactive material. The majority of the rubble will go to a disposal facility in Clive, Utah, primarily shipped by rail car. However, a portion of the material will be carried in casks by truck. Class B and C low-level waste is being sent to a site near Andrews in West Texas. Finally, non-radioactive material goes to Arizona.

Initially, the decision to close the plant came after the need to replace an expensive steam generator became an issue and the cost was not feasible for the plant.

“We replaced a steam generator for both units back around 2010, but there was an issue with the design of the steam generators,” said Dobken. “So, they had some wear on the tubes inside of them, and these steam generators are a major undertaking to replace them. These [generators] are specifically designed for SONGS; manufactured, shipped, and then installed. It’s a lengthy process and a very expensive project, so once you’ve identified issues with them going through that process again to replace them, well, you can’t operate. It makes it sort of an impossible situation to be in.”

In addition, in 2018, a 50-ton canister filled with fuel assemblies was lowered into the new dry storage facility and left suspended on a metal flange roughly 18 feet from the floor of its storage cavity. The canister was unsupported by rigging and lifting equipment and was eventually lowered safely, but the Nuclear Regulatory Commission later fined Edison $116,000.

The dismantling of SONGS has a price tag of nearly $4.5 million due to existing decommissioning trust funds. The money has been collected from taxpayers and invested in dedicated trusts. According to Edison, customers have contributed about one-third of the trust funds, while the remaining two-thirds have come from returns on investments made by the company.

Currently, the project needs more rail cars to haul away the remains of the plant. At present, more than 1,200 rail and truck shipments have left the station carrying with them 60 million pounds of scrap. However, only one line goes into the plant and one line that goes out, greatly hindering the speed of their progress.

According to Amanda Wood, who manages waste for SONGS Decommissioning Solutions, the station has such a small footprint that once the project starts generating waste, space for it to collect will quickly deplete. As a result, Wood is increasing the number of rail cars from the current eight they are working with now, up to 50 rail cars on-site at once. The additional capacity will increase the rail consignment from 15 per week to as many as 30 shipments per week.

Underwater labor has also become a difficult task throughout the project. Teams are now removing each reactor vessel from Unit 2 and Unit 3. Each vessel weighs more than a million pounds and is about 25 feet tall and 16 feet in diameter. The internal parts of the vessels were close to nuclear fuel; therefore, they are counted as low-level radioactive waste. That means that the process of cutting and retrieving the pieces is done underwater. Each cavity is filled with about 500,000 gallons of treated, demineralized water to retrieve the components successfully.

Operated remotely by a crew using underwater cameras, the reactor vessel components are pulled out one by one and then cut into pieces with a rotating saw. Using robotics, the remains are then retrieved and placed into containers. The operation requires a crew of 12 to 20.

Those well-known domes go by the names of Unit 2 and Unit 3; each one is 190 feet tall and are two of the most recognized landmarks on the I-5, from up above by the planes and by sailors in the ocean. Once the insides of the domes are emptied, the shells will be removed; the phase is expected to occur around 2025. The domes will not go down dramatically but will slowly be dismantled from the ground up. Workers will use hydraulic hammers to chip away at the 160-foot-wide structure until the domes inevitably collapse. That process is projected to take one year.

Not everything will be taken away from the site; a few structures will remain. For example, two dry storage facilities that contain spent fuel assemblies will remain. The spent fuel assemblies are the highly radioactive material that generated 2,200 megawatts of electricity when the plant was operating, enough to serve roughly one million homes at any point in time. The dry storage facilities have been controversial, and some expressed concerns say the canisters are not thick enough to combat cracking and degradation over time. However, Edison and the canisters’ manufacturer defend and confirm the safety and robustness of the canisters.

“We lease the land from the navy, so it’s part of Camp Pendleton,” said Dobken. So, once we go through this phase, which is the dismantlement and then the decontamination of the site, we stabilize it and backfill it. Then we really wait for the spent nuclear fuel to be relocated offsite because currently there is no place to move it to, so the federal government has to, you know, develop a repository, and then once the fuel is then moved offsite, we will work with the Navy on final site restoration and then terminate the lease with them and they take it over.”

One thought on “It’s Been Two Years; What’s Up with the San Onofre Nuclear Plant?”