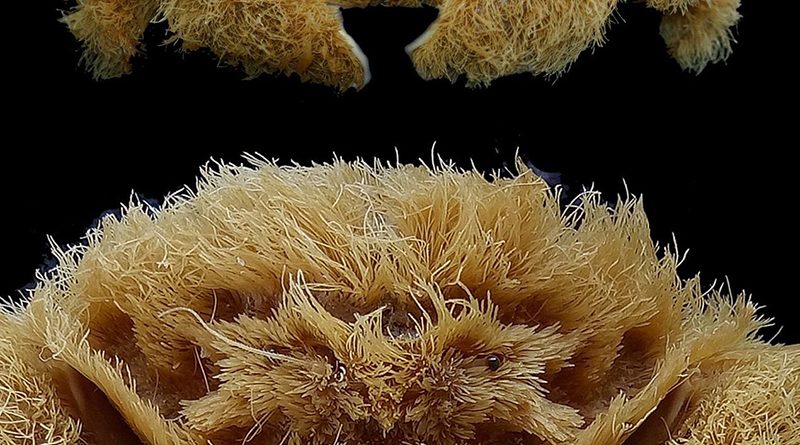 The Lamarckdromia beagle proves fashion can be functional with a protective hat. Image courtesy of Facebook/WA Museum Collections and Research

It was fashion week on a Western Australian beach when an undiscovered crab species washed ashore, rocking a hat made of sea sponge.

On June 7, the Western Australian Museum shared the latest trend in oceanic fashion, sponge hats for crabs. The Lamarckdromia beagle, a southwest endemic crab named for Charles Darwin’s HMS Beagle, has been the talk of the museum as a new subspecies.

The crab is part of the sponge crab, or Dromiidae family, a species of crab that will turn living sponges into portable shelters to protect themselves from predators.

There are 31 species of dromiid crabs known to the Western Australian coast, with five species endemic to that part of the country.

There are also 40 more species of Dromiidae known throughout Australia, with about 40 percent considered to be endemic, according to a study of sponge crabs published on Zootaxa in April 2022.

The crabs will cut a sponge or sea squirt to fit themselves and then hold the sponge on their head with specialized hind legs, according to the curator of crustacea and worms at the museum, Dr. Andrew Hosie.

This species is also not the only one to use other sea life as protective wear. Crab species will wear sponges or ascidian as a disguise or an olfactory deterrent.

“Some of the compounds these sponges are producing are very noxious,” said Hosie in an interview with The Guardian. “There’s not a lot of predators that would be interested in munching through a sponge just to get crab.”

This particular crab species is set a part by its dense shaggy hair, which is actually soft and fluffy to the touch.

Scientists’ best guess is that the fuzz helps to obscure the outline of the crab’s limbs and other body parts not covered by the sponge to allow it to blend in with its spongy sunhat and to protect it from predators.

While scientists are unaware of the hair’s actual function, it makes for a pretty cute crustacean.