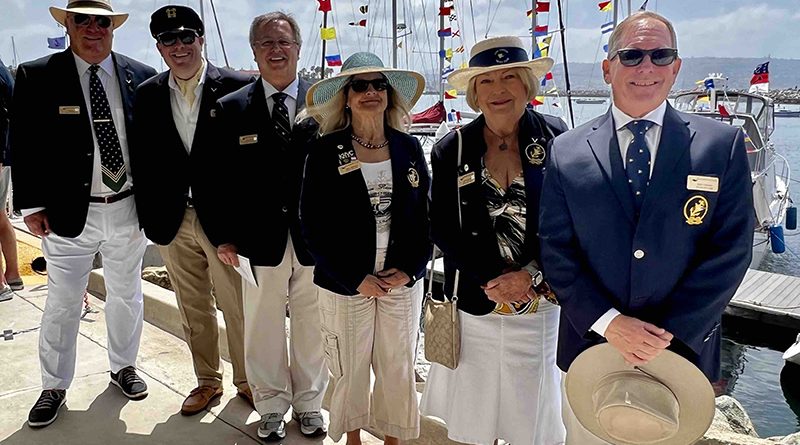 REDONDO BEACH— The Opening Day ceremonies for the boating season at King Harbor Yacht Club were celebrated on April 10. The ceremonies are modeled after events in the northeast and other cold climes, where boaters must wait for the ice to melt before they can begin boating. Because of the endless 365-day SoCal season, local boaters joke that the only ice is in their drinks.

This is the 73rd boating season for KHYC, formed by the merger of Win’Ard Yacht club, founded in 1949, and Redondo Harbor Yacht Club, founded in 1956. The clubs merged in 1960 and built the current clubhouse in 1964. This year’s Commodore is Francie Hope, who is married to the 2006 Commodore, who is the son of the 1956 Commodore; it is a family affair.

Guests included commodores from many sister SoCal yacht clubs and various community leaders, including from the U.S.Coast Guard and its auxiliary. The offices of the Redondo Beach Congressman, State Senator, Assemblyman, and County Supervisor all provided proclamations in honor of the Opening Day. Redondo Beach Mayor Bill Brand personally addressed the assembly, accompanied by harbor-area Councilman Todd Loewenstein.

The members and guests were fed appetizers and champagne, followed by a barbecue and dancing, and music was provided by a live band. Two-dozen hospitality boats flew decorative signal flags while the guests aboard for snacks and libations. The entire extravaganza was chaired by the outgoing Commodore, Tom Polizzi, who was inducted into the ‘International Order of the Blue Gavel’ for his service to yachting.

King Harbor Yacht Club hosts year-round sailboat races that are open to all boat owners and community members wishing to crew. In addition, the club has sailboats available to rent for its members. KHYC also incorporates ‘Fleets’ of boaters with similar interests, including Cruisers, Powerboaters, and Fishermen.

The club provides Adult Sailing Lessons and Youth Summer Camps to the public during the summer.

Please contact the Club Manager at (310) 376-2459 during regular working hours to set up a tour of the facilities and meet members.