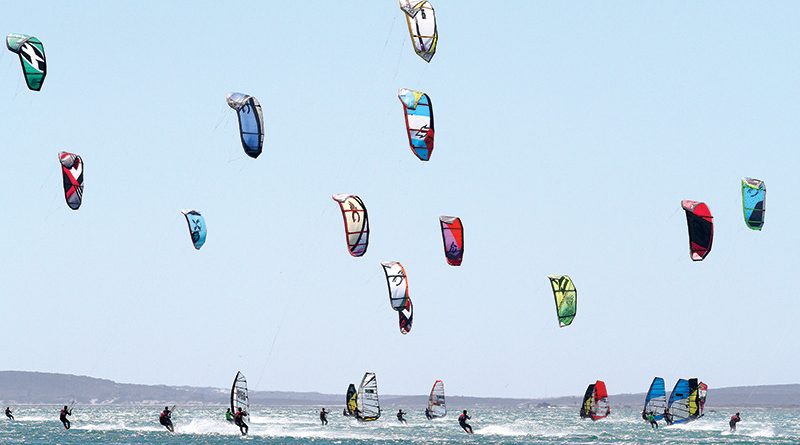 The league was created by a group of friends who were interested in upping the kite foil racing scene in California, their interest is in lieu of the induction of the sport into the 2024 Paris Olympics.

CALIFORNIA一 Standing on the beach in Long Beach on July 17, passersby would have noticed a group of colorful kites dotting the sky just offshore. Twenty-six kiters were out on the water duking it out in 13 two-lap races for the lowest set of points in the Sea Breeze Invitational, the second race in the California Triple Crown Series hosted by the Kite Foil League.

The league, based in Southern California, was created by a group of friends who were inspired to up the racing experience here in the United States after the International Olympic Committee announced that Kite Foil Racing would join the sailing events in the 2024 Paris Olympics.

“We were all kind of hanging out one afternoon and you know we were talking about how we could get to the place where you could go and win a gold medal for the U.S.,” said Willie McBride chief executive officer for the Kite Foil League. “One of the big things that came up was you know there is not enough racing here in the United States… We want to create super high-level racing as they have in Europe here in the United States and hopefully be able to bring national and regional and international events here to the United States.”

Kite foiling also referred to as hydrofoil kiteboarding, foil boarding, and foil kitesurfing is a sport where racers use a kite and a hydrofoil allowing the racer to kite along the surface of the water.

Kite foiling got its evolution from kiteboarding, people realized that they could drag themselves behind a kite on different types of boards, like wakeboards or surfboards.

Once the racing started and people tried to go upwind, they began to add longer fins to the boards to make them go faster, and eventually, it was discovered that by adding a hydrofoil they could maximize their speed.

“So, at this point, the technology has evolved to the point where these guys are going three times the speed of the wind,” said McBride. “So, in 10 knots of wind, these guys will do 30 to 35 knots downwind and 25 knots upwind.”

McBride compared the sport to Olympic snowboarding, with the amount of speed that racers gain paired with the chop of the water and ability to navigate the course.

“I think really at the end of the day it is more akin to snowboard racing in the Olympics,” said McBride. “Or something like that downhill skiing where these guys are going so fast it’s really all about managing the sea state and the chop and the wind and you know it’s kind of like a mogul course on a ski mountain where every little piece of chop out there on the water is impacting how they navigate the course.”

McBride said that between an influx of 32 racers for the previous two events and almost 20 volunteers that have come down, the league is gain and hopefully will continue to gain momentum moving forward.

McBride said part of it is the sense of community that the league has to offer and the excitement of creating a better racing community here in California.

Because of sponsors and volunteers willing to come down and spend the time, the league has been able to offer free entry, and it is open to anyone with a kite and board.

Or if you are just looking to volunteer, there are opportunities to be involved in the production of the event.

“People can get involved in a lot of different ways the number one way that we encourage people to get involved is we want kiters to get out on the water and come race,” said McBride.

The next race is the Ledbetter Classic Aug. 20 – 22 in Santa Barbara, for more information see https://www.kitefoilleague.com/.