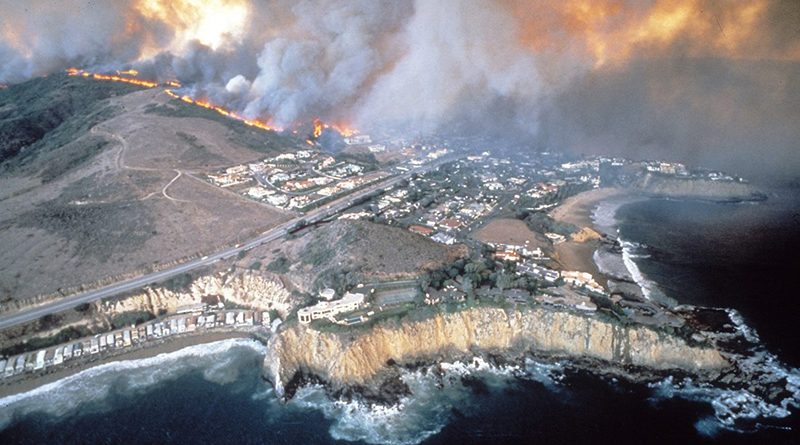 LAGUNA BEACH一 In 1993, Southern California experienced one of the fastest and most damaging fires in United States history, according to the Portland Fire and Rescue website.

On Oct. 27, 1993, a brush fire in Laguna Canyon began to spread partially due to high winds reaching speeds of almost 40 miles per hour and embers that jumped over the firebreak into Laguna Beach and Emerald Bay.

The top half of Emerald Bay burned at a rate of 100 acres per minute and the fire burned 1.25 miles of brush in the canyon in 17 minutes, according to an Oct. 19 article from Stu News Laguna about the 25-year anniversary of the fire.

At peak demand, approximately 20,000 gallons of water per minute were used by firefighters to control the fire, according to the Laguna Beach County Water District. The District took what they learned from the 1993 fire and the extreme demand on their resources to update their systems by; updating its master plan to include a goal at fire hydrants of 3,000 gallons per minute at the interface between open space and urban area; building two reservoirs totaling eight million gallons; purchasing additional fixed and portable emergency generators for pump stations; purchasing an additional portable, large capacity, pumps; installing parallel pipelines in strategic areas for fire flow improvement; identifying low-pressure areas within the District, some of which (but not all) can be improved.