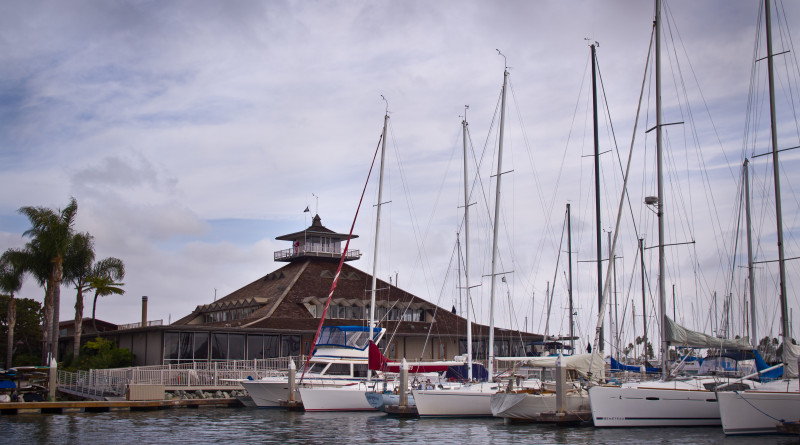 SOUTHERN CALIFORNIA — California has one of the largest concentrations of recreational boating activity in the nation, according to Division of Boating and Waterways (DBW), but what are boaters doing to ensure they are not harming local marine life while enjoying a day out on the water?

Regional and local agencies are not alone in pushing for environmentally friendly policies and practices in local harbors or marinas. Yacht clubs have become quite the ally in helping civic leaders and boaters become mindful of their surrounding ecosystem.

The Log takes a look at what some local yacht clubs are doing to ensure clean and green practices on the water.

The San Diego Yacht Club (SDYC) facility, home to 2,100 members and 576 slips, underwent a $10 million renovation about seven years ago. One of the upgrades included the installation of numerous filtration systems in the parking area to catch and filter debris before it ends up in the bay. Solar panels were also installed to heat shower water in all restrooms outside of the pool area.

SDYC established a “Green Committee,” which committed the club to a six-year goal to “get off the grid electronically,” according to General Manager Terry Anglin. The committee is looking at battery storage or other solar systems.

The club is a designated Clean Marina and is involved in the clean regatta program.

Picking up debris floating in the water is a priority for this yacht club.

During regattas the yacht club gives out reusable water bottles to participants and utilizes a “zip to water” system. This is basically a big box attached to a hose and acts as a mobile filtration system to encourage refillable water bottle usage.

At the bottom of race notices, the international green regatta guidelines are outlined, stating, “use reusable drink containers instead of plastic bottles; recycle trash to the greatest extent possible; use water sparingly to wash boats; use green clean products; and respect the ocean.”

The club also uses biodegradable utensils and plates as part of its food and beverage operation. Recycled paper bags are used instead of plastic bags. There are blue recycling bins strategically place around the club.

SDYC is involved in the Shelter Island Yacht Basin group, which deals with the current Total Maximum Daily Load (TMDL) regulations in regards to copper paint. Club leadership conducts a census every year to determine whether members are complying with mandated copper regulations and using only low-copper paint on their boat bottoms. The yacht club also hosts seminars to encourage members to use low-copper paint.

What more could be done? According to Anglin, “the city and the Port of San Diego need to take a look at what is getting discharged into the bay. There needs to be more filtration systems in the main drains going into the bay.”

Alamitos Bay Marina is one of three marinas in Long Beach designated as a Clean Marina.

The Alamitos Bay Yacht Club (ABYC) instructs its members to pick up any trash they see on the docks or in the water. Many of their members also participate in beach clean-ups.

Sailors for the Sea is an environmental organization for the sailing and boating community to encourage conservation efforts.

According to the most recent Biological Harbor Study done on the Port of Los Angeles and Port of Long Beach, water quality continues to improve in these ports.

“As boaters and yachtsmen, we all recognize it is important to keep our facilities and marinas as clean as possible,” Willard Bell, Vice Commodore of Los Angeles Yacht Club (LAYC), told The Log.

LAYC has a maintenance program which involves inspecting the facility’s roof, drainage system and rain gutters to make sure they are clean. The club also has a dry storage yard and efforts are made to ensure the grounds are clean. All of this is to make certain runoff into the harbor remains minimal.

“[The club] promotes the cleanliness of the marina through our Wednesday luncheon programs,” Bell stated. “[Our] lunch is open to all the yachtsmen. We try to have speakers every week. At times, [we] have environmental groups that come in [to speak]. The hot topic is the plastic floatables in the harbors.”

Bell personally picks up any plastic floating in the water he sees, and members are encouraged to do the same.

“The marina has done a great job in their management to alert its members and mooring leasers to not discharge into the storm drains,” Bell commented.

The program maintains an emergency petroleum spill kit, with absorbent pads, on the dock. Club leadership ensures certain personnel are trained annually to properly use the spill kit when necessary. VYC also purchases oil absorbent pads and makes them available to its members at no cost.

Members are required to use oil absorbent pads under all engines to catch drippings before they get pumped out with the bilge water. Drippings, according to the club, are the top source of pollution.

VYC members are required to use holding tanks, encouraged to use pumpout services, educated about proper disposal of hazardous waste (oil, diesel, paints, batteries, etc.) and prohibited from engaging in maintenance activities (such as sanding) that would cause debris to end up in the water.

Club members are prohibited from painting between the gunnels and waterline. Washing of cars or boats in the VYC is not allowed. An oil disposal tank is maintained on-site and separate dumpsters exist for recyclables.

The club also participates in two beach cleanups per year and its members participate in monthly trash pickup activities.

In addition to these practices, VYC includes articles in their newsletters about how to maintain water quality.

With approximately 235 yacht members, the VYC has various committees such as Marina Management which acts as a watchdog over the docks.

There is another committee working with the Channel Islands park service to assist with several projects. This committee met with National Park Service and Nature Conservancy on Jan. 10. One of the agendas is to go out to the islands to provide beach cleanup.

Many of the VYC members also participate as naturalists on the Channel Islands for when the Island Packers Cruise takes visitors there. The naturalists provide environmental information when the people land on the beach.

VYC has the Ventura Sail and Power Squadron teach the basic ABC classes at their facility. These classes cover educational materials about proper disposal of trash, black water and oils.

“I think we are doing fairly well being responsible stewards,” Lawson stated.

Bahia Corinthian Yacht Club (BCYC) in Corona del Mar lists environmental policies under “Port Rules” on its website. From boat cleaning to repairs, the section explains what is (and is not) allowed in the harbor.

Along with online and printed materials available to boaters, the yacht club’s young junior mariner programs offer curriculum on safe and proper boating which includes stewardship of the environment.

Camp Corinthian, a summer program featuring a 50-50 balance of member and non-member children from the surrounding areas, teaches youth to respect the bay and leave the beaches along with the waterways looking better than they did before they arrive, according to a BCYC representative.

Every BCYC marina dock, in addition, has trash and recycling receptacles for visiting and member boaters, along with “spill material” bins in case of a spill.

A water clarifier system was installed a few years ago in the yacht club’s boatyard to help prevent heavy waste and metals from flowing into the harbor.

An annual presentation is made to the Board of Directors regarding coastal waterway regulation updates, which is then made available to yacht club members.

Members participate in “Beach Cleanup Day” where trash in the water and local shorelines is collected near the U.S. Coast Guard Station.

When asked what more could be done, a BCYC representative stated, “Perhaps the city government could take on some additional burden from the environmental groups in public awareness/clean waters in the bay. People often joke about loving to fish but can’t eat the fish caught in the bay!”

California Yacht Club (CYC) and the entirety of Marina del Rey have both been designated a Clean Marina. Clean Marina refers to actively encouraging boaters to engage in “Best Management Practices” to prevent and reduce pollution in the water.

“We have an ongoing program in communicating to our members about what we expect them to do as good citizen to continue to protect the marina from pollution,” CYC President Steve Hathaway told The Log. “Since we do have an anchorage and are a designated Clean Marina, we provide facilities to protect the water.”

CYC has more than 1,000 members and approximately 300 slips. Accordingly the yacht club hopes to do what it can to keep their marina clean and be a good example to others.

Hathaway says the club bans discharge from boats and monitors its members’ boats of any discharge or spilled oil.

CYC members are prohibited from doing any major boat work on the club’s docks.

“No Dumping” signs are positioned around the property. The signs also inform members and visitors about anything dumped into storm drains will end up in the marina or ocean.

Chemical disposals are not allowed in the club’s dumpsters, and bird feeding is banned.

Members are provided with recycling bins and scoop nets to lift debris out of the water.

The club’s general manager occasionally publishes an article in the club’s monthly newsletter to remind members of “Best Management Practices” or BMP.

CYC’s leadership and staff also monitor what paints its members use on the hulls of their boats. The club only endorses category one paints.

On occasion the club invites a Recreational Boaters of California representative to discuss green programs with its members and the general public.

The club also promotes hull-cleaning divers to engage in BMP when they clean boat bottoms. Los Angeles County is drafting an ordinance to dictate to all divers performing work in the marina to be certified, according to Hathaway.

“We are encouraging members that see deflated balloon debris to pick them up and bring them back to the club,” Hathaway said. “We have a monthly contest for whoever brings back the most deflated balloons.” The winner is rewarded with a dinner at the club as a show of appreciation in helping to keep the Santa Monica Bay clean.

For a complete list of yacht clubs and marinas designated as Clean Marina, go online at cleanmarina.org/thecleanlist.html.