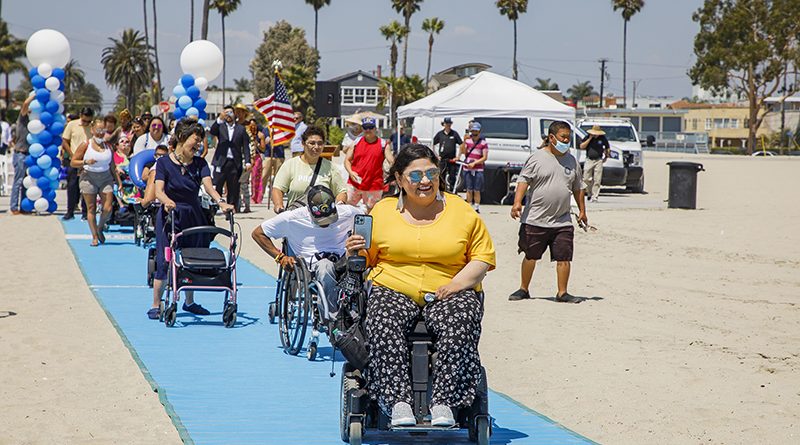 Councilmember Mary Zendejas, who uses a wheelchair, navigated the new inclusionary access mat at the grand unveiling at Granada Beach. Image courtesy of the City of Long Beach

The City of Long Beach has officially celebrated the installation of new ADA-compliant mats that allow people of all accessibilities to have easy access across three Long Beach beaches.

LONG BEACH— On July 15, the City of Long Beach celebrated as it revealed the installation of its first-ever beach access mats, making it possible for people of all abilities to easily access Alamitos, Mother’s, and Granada beaches. The city welcomed the public to unveil the infrastructure. They were joined by city members, Public Works, the Citizen’s Advisory Commission on Disabilities, and Mayor Robert Garcia.

According to the United States Census Bureau, out of a population of 456,062 people living in Long Beach, seven percent under the age of 65 are living with disabilities, roughly 31,924 people.

“There is a t-shaped platform at the end of each mat that allows users of the mats to place themselves in a comfortable position and have enough room to turn around to roll or walk back,” said Long Beach Community Relations Officer Joy Contreras.

Long Beach Councilmember Mary Zendejas, who uses a wheelchair, was the first to traverse the highly anticipated mat at the unveiling at Granada Beach, followed by a group of community members and activists for the disabled community. Zendejas is an ADA coordinator for the city to help ensure that life is more accessible and equitable for all residents.

“Part of what makes Long Beach such an amazing place to live are our beaches, and we’re striving to make them accessible and enjoyable for everyone,” said Garcia in a July 1 press release. “This is going to dramatically improve access to our coastline for so many people.”

The durable mats are anchored ground coverings made by AccessMat, a company founded in Clifton, New Jersey. The mats are made from 100 percent recycled material, featuring non-slip synthetic rubber developed to support wheeled pedestrian assistance vehicles, such as wheelchairs, beach access chairs, walkers, and strollers. In addition, the ADA-compliant mats are strong enough to withstand the weight of utility vehicle traffic.

The beach access mat installation was proposed to the Long Beach City Council last summer by Third District Councilwoman Suzie Price. It was co-sponsored by Councilwoman Zendejas and Councilwoman Allen and approved by the council.

There were a few different phases of approval this project required. Initial approval came when the City Council directed that department to explore the feasibility of this proposal on July 13, 2021.

“The beach access mats will make it easier for more people to enjoy our amazing beaches and marinas, and I can’t wait to see our community put them to good use,” said Councilwoman Suzie Price in the press release.

The beach access mats are located in the city’s waterfront districts and are colored blue to help guide the visually impaired and to be easily identifiable as ADA-accessible. In addition, the mats are available for public use year-round.

“The costs of the mats are $50K, but this cost does not account for the staff time, installation, and permits from the California Coastal Commission,” said Contreras.