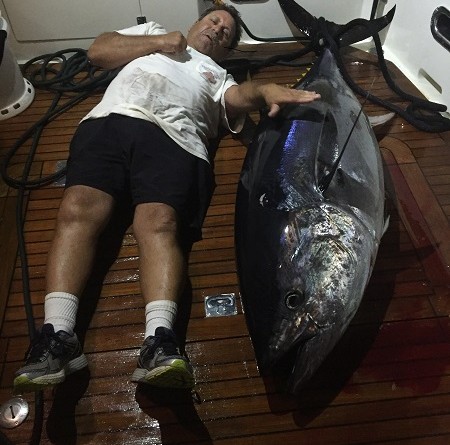 Charity event might not happen in 2017 due to staffing challenges.

SAN DIEGO — An annual fishing fundraising event that raised more than $3.2 million over 27 years might not return in 2017 due to staffing shortages.

The Make-A-Wish Tuna Challenge in San Diego is in jeopardy of being put on hold because the all-volunteer staff does not have enough manpower to keep up with the event’s growing size.

A letter from Make-A-Wish San Diego to its supporters just before Christmas stated the Tuna Challenge would be put on pause in 2017.

“Our all-volunteer committee, led for the past three years by Mike Smith, has performed some very heavy lifting to pull off the Tuna Challenge in a first-class fashion,” Make-A-Wish San Diego President and CEO Chris Sichel said in his Dec. 19, 2016 letter to supporters. “However, the number of committee members needed to bring this event to fruition has not kept pace with the growing needs for an event of this magnitude.”

Sichel said the organizations hoped to ramp up enough community interest and support to bring the event back in 2018.

Interestingly enough the Make-A-Wish chapter in San Diego received a positive response from anglers since the December 2016 letter went out to supporters, Sichel said in a follow-up email to The Log in early January.

“Our current challenge is that we don’t have enough committed members of the committee to take on the event in 2017. That being said, in the last week or so since the letter went out, we’ve heard from several anglers who’ve expressed interest in helping for 2017 and beyond,” Sichel told The Log. “We’ll be looking into whether the event could take place if there is sufficient support.”

The most recent Tuna Challenge was held in August 2016 at Silver Gate Yacht Club in San Diego, with 375 anglers raising about $155,000 for the Make-A-Wish Foundation.

Anyone interested in volunteering for the Make-A-Wish Tuna Challenge can contact Sichel by phone (619-279-5204) or email (csichel@wishsandiego.org).

More information about Make-A-Wish San Diego is available on its website, which is sandiego.wish.org. The nonprofit organization honors wishes of children with life-threatening diseases.